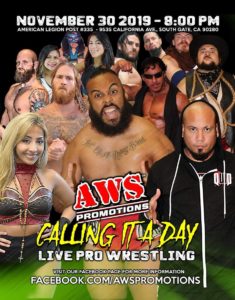 I had only just made it to my first AWS show with the Wrestling Examiner crew back in September so it was an honor to be at their potential final show ever with the Examiner as well. Hopefully this is just a “see you later” as opposed to a “farewell.” This show was on fire from start to finish so let’s get right into the action! The results are below along with some miscellaneous notes along the way.

Before the next match referee Justin Borden came out to MASSIVE heat from the crowd. He may have had the most heat on the entire card. With Rick Knox no longer in California Borden was named the SoCal senior official to a huge chorus of boos.

WINNERS: The Millenials won with a double flatliner.

TONIGHT! MPW boys are coming to show what we got! @bartaws pic.twitter.com/CzAQGTjjKb

WINNERS: Vipress and Raze won – Raze made the cover after Vipress did a splash off of Raze’s shoulders.

. @RefJeremyMarcus why you gotta be such a hater though? You should’ve allowed my boo @Razerpops to choke the Sea Hoes with my weave 😡. Smh – @bartaws pic.twitter.com/Ffjf9xCd7m

WINNERS: The Lucha Homies won with either a cutter or a Tope Leg Drop.

Thank you so much to AWS to Bart And to the lucha homies for a dream match can't wait for more.

WINNER: Under Lucha Libre rules, the match was initially ruled a double disqualification after a low blow and a mask was taken off. The match was restarted and Hector Canales ended up making the pin.

WINNERS AND NEW CHAMPIONS: The Wolf Zaddies won with a small package from Bad Dude Tito and a fast count from referee Justin Borden. 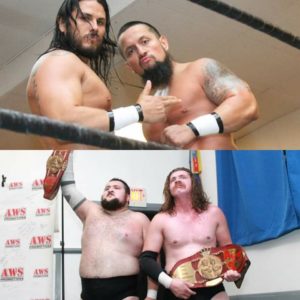