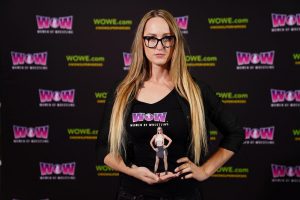 Welcome to the inaugural edition of The Kayfabe Journal! As a lifelong pro wrestling fan, one of my absolute favorite things about wrestling is the gimmicks, more specifically the characters. A great character makes a great wrestler shine that much brighter. Growing up, my favorite wrestler was Mr. Perfect. Mr. Perfect claimed he was “perfect in every way,” and because of his stellar promo work doing everything absolutely perfect – from bowling a perfect game to throwing himself an 80 yard touchdown – when he got in the ring I 100% believed he was the perfect wrestler.  With that as background, I wanted to do a recurring feature where I interview wrestlers – completely in character – to highlight all the amazing character work that’s happening right now in the wrestling world. And I couldn’t have landed a better first interview than with WOW’s IQ Superior, Samantha Smart!

Samantha is not only the genius of WOW but also the most intelligent person in the world as well. Her heel manager work is amazing to watch on television and even more incredible to behold live in person, worth the price of admission alone for her interactions with the ringside fans. If you’re not following her on social media, I strongly recommend you do so. Not only will you gain intellectual stimulation of the highest order, but her smack talk game is on fire whenever she live tweets an episode of WOW. Follow her on Twitter here and on Instagram here. And now, let the intellectual enlightenment commence.

Samantha thank you so much for gracing our readers with your unparalleled intellect.

Yes what a fortuitous opportunity for your IQ inferior readers.

You of course are known as the IQ Superior. Exactly how high is your IQ?

Well of course I am the IQ Superior. Numbers are very hard for the stupid. So let me try to put this in a way that the mathematically challenged can understand. My IQ in number is slightly higher than Graham’s number. Do you know what that is?

Well let me help you. Graham’s number is a number so absurdly large that if a human brain even tried to calculate all of the numbers it would implode on itself as a black hole.

And you know what if that’s confusing you can just note that I am helping retool Mensa.

Is there any one particular field you excel in? Mathematics, science, etc, or are you just a well rounded genius?

Why would I excel in only one field as IQ Superior? I am superior at everything – finances, math, art, music, wrestling – everything.

Do you have a doctorate? Should I be calling you Dr. Samantha Smart?

I thought we started off with my title already, the IQ Superior. I denounce the Board of Education. I do not follow these guidelines of pathetic public education standards. If I was to try to count my degrees we would be here all day and the convention center is closing soon.

Any notable achievements you’d like to mention? Have you won any Nobel Prizes yet? Anything else along those lines?

Yeah I have won pretty much every prize you can ever think of. I actually found WOW while I was doing a TED Talk at the Jet Propulsion Laboratories in Pasadena so feel free to go there and ask any of my colleagues about my achievements. I’m sure other people love talking about me.

Most excellent. Moving on to WOW, you’ve been managing The Disciplinarian and then recently you’ve taken on The Governor’s Daughter Abilene Maverick. What drew you to them?

Well I believe in corporations and mergers. And merging things for my financial success and my end goal of world domination. So I cannot do that with just one tool in my toolbox, and as I can see the WOW roster is full of tools of which are at my full disposal.

Are there any other “tools” – or WOW competitors – you’re considering taking under your wing?

Well perhaps. Whoever suits my needs at the moment I would of course take under my wing. I’m waiting for someone to prove worthy. And I am not trying to achieve short term goals, I am going for long term goals – hard for these stupid people to understand.

Now I’ve noticed you tend to break the rules when you’re at ringside during your client’s matches. Samantha, why? Isn’t your brain already an unfair advantage?

Indeed, it is an unfair advantage. However, the IQ inferior refs – which if you ask me should be replaced by either artificial intelligence or robots who can make fair, quick decisions – I have to step in when they don’t do their job right. Just like I have to step in if The Disciplinarian doesn’t do her job right. I am doing a favor to the world by making sure the right outcome takes place.

Going back to the rule breaking, you sometimes hit people with a ruler when there’s a distraction, but a robot referee would probably catch you cheating with the ruler in that scenario.

Well probably, but humans are so dumb that we do not yet have those superior refs, so until we do I’m in the same game as everyone else. You know the most tragic thing about my tool is that the very rude Stephy Slays broke my measuring tool on her back in season one, can you believe that? How am I supposed to take calculations when she’s going to break my tool with her back? I was just trying to help.

Now there was one match where you choked Sassy Massy with your measuring tool when the ref wasn’t looking, could you explain that please?

That’s amazing, yes, humanitarian indeed. Any final words of wisdom you’d like to leave our readers with?

Fantastic Samantha, thank you so much.

Thank you, the pleasure was all yours.

Previous Pro Wrestling Legend Jerry Lynn Reveals He Needs Surgery
Next The New Day vs. The Revival Announced For This Friday’s SmackDown