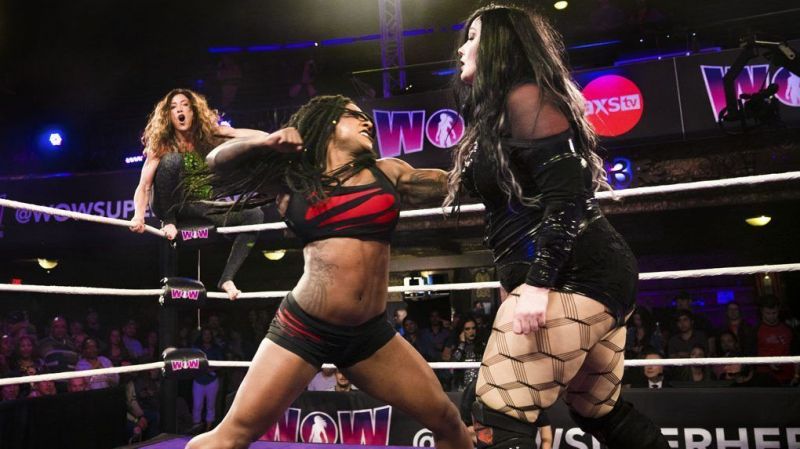 This week’s WOW opened with a recap of the first two episodes, for your very own recap just click here and here! Also, see if YOU can spot Wrestling Examiner editor Jaime Michel in the crowd! First one to find him wins an honorary Slammy!

After the recap, David McClane brought Tessa Blanchard to the ring for an interview. Blanchard noted how she pinned Jungle Grrrl to win the title, saying she pinned a woman whose shoulders hadn’t been pinned to the mat during her eighteen year WOW career. Blanchard said the only reason that streak went on for so long was because she wasn’t there to beat Jungle Grrrl earlier. That comment brought out Jungle Grrrl. Jungle Grrrl said Blanchard had amnesia because she was forgetting it took two people to beat her (The Beast had attacked Jungle Grrrl during her match, which set Blanchard up for the win). Jungle Grrrl challenged Blanchard to a one-on-one match RIGHT NOW, and Blanchard was game, but then The Monsters of Madness (Havok and Hazard) came to the ring. Blanchard left, saying if Jungle Grrrl’s so bad she can take the Monsters on herself. McClane said there wasn’t going to be a two-on-one match, and The Beast then came to the ring. McClane said since Hazard cost Beast and Jungle Grrrl a shot at the title by interfering in their triple threat match with Havok, the two of them would be taking on The Monsters of Madness tonight.

Match One: Nikki Krumpus (with Sophia Lopez) Vs Princess Aussie

The Greatest Attorney In The World, @wowe_sophia set up a match for her newest client: The Norwegian Nightmare, Nikki Krampus against The Unbreakable, @AussieWow. #WOWSuperheroes pic.twitter.com/5NaqwmJE5j

Match Two: The Temptress (with The Dagger) Vs Reyna Reyes

A video package was shown of the newest Psycho Sister Mezmeriah. According to the video, Mezmeriah was raised in total darkness in the underbelly of Los Angeles’s underground tunnels. When she finally visited the surface world, she instantly found herself surrounded in a street war, with beautiful violence all around her. Mezmeriah would quickly find herself in a battle with her future Psycho Sisters. Though she lost, they were impressed by her fighting skills and asked her to join their gang, with their eyes firmly set on the WOW Tag Team Titles. Psycho Sister Razor said that “what Razor wants Razor gets” and with Mezmeriah’s crazy help they would be wearing the gold faster than you can say “who are all those other girls.”

A second video package was shown hyping the new team of The Disciplinarian and Abilene Maverick, managed by The IQ Superior Samantha Smart, and how their bond over a shared enemy led to them teaming up for the WOW Tag Team Series.

Match Three: The Disciplinarian and “The Governor’s Daughter” Abilene Maverick Vs Chantilly Chella and Sassy Massy

A video package was shown of Abilene Maverick and The Disciplinarian arguing in the locker room, blaming each other for the loss. Samantha Smart attempted to broker peace, but neither party was having it.

Match Four: The Monsters of Madness (Havok and Hazard) Vs Jungle Grrrl and The Beast