Share
If you’re unfamiliar with WOW (Women of Wrestling), they are entering their second season on AXS TV (which also airs New Japan Pro Wrestling). The company is owned by Jeanie Buss and was created by GLOW creator David McLane. Their talented roster features women who have competed with WWE, Lucha Underground, and Impact Wrestling along with some great indie wrestlers and some newcomers to the wrestling world. WOW airs on AXS Saturday nights at 8:00 pm and can also be found on Sling TV. If you don’t have either of those fear not! The Wrestling Examiner is here to recap the show for you!
Season 1 Recap – Tessa Blanchard won the WOW World Championship but has a lot of competition ahead of her!
Season 2 Episode 1
The show opened with David McLane introducing World Champion Tessa Blanchard. Blanchard wasted no time calling out the competition. The Beast was the first to answer the call, followed by Jungle Grrrl (no relation to Jungle Boy). Blanchard attempted to leave the ring at that point, but was chased back into the ring by Havok. Blanchard told McClane she’ll fight next week and for him to figure out who. Blanchard shoved the mic into McLane’s chest and left. McClane set up a number one contender triple threat main event of The Beast vs Jungle Grrrl vs Havok.
MATCH ONE: Jessie Jones Vs Fire 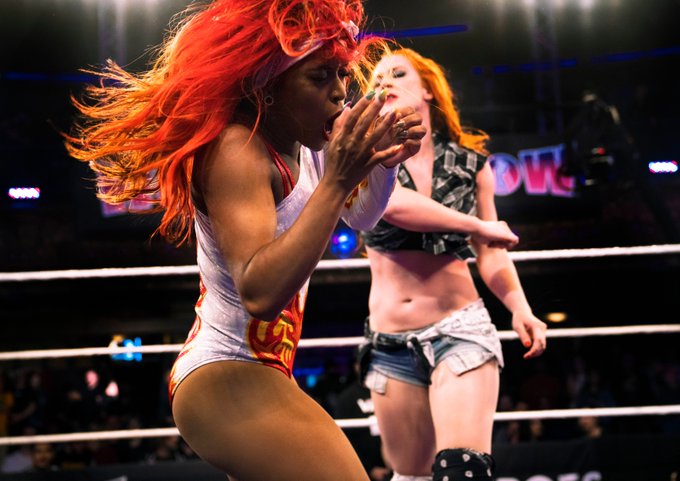 A video package of Azteca was shown, who announced she wanted to show the world her true identity and declared herself Reyna Reyes, The Pearl of the Philippines.
A second video package followed, this time highlighting the history of women’s tag team wrestling. It was well produced, even indirectly touching on the disappearance of the WWF women’s tag team titles in the late 80’s.
MATCH TWO: The Disciplinarian (with Samantha Smart) Vs Sassy Massy

MATCH THREE: The Psycho Sisters (Razor and Fury, with Mezmeriah) Vs Princess Aussie and Reyna Reyes

Welcome to the Psycho sisterhood! Season 2 will never be the same as these sisters rain anarchy and cause grievous bodily harm to all that stand in their way! @wow_mezmeriah @razor_wow @wow_fury #WOWSuperheroes pic.twitter.com/8ueBFynC7U

MATCH FOUR: The Beast Vs Havok Vs Jungle Grrrl (Number One Contenders Match)