WOW was everywhere last weekend! Besides the regular Saturday show, WOW took over LA Comic Con and put on a live match at the Con! In singles competition, The Beast took on Faith The Lioness. The already underdog Lioness was without the services of her new manager Lana Star. Up against one of WOW’s top competitors, The Lioness put up a good fight, but in the end The Beast came away with the victory after a vicious power bomb. Also I got an exclusive interview with a WOW superhero (hint – she’s really really SMART), which I’ll be posting in the near future. Last note before the recap, there is still an honorary Slammy to be claimed for spotting Wrestling Examiner editor Jaime Michel in the crowd! Hurry up and find him before the Ghost of Christmas Dystopian Future ensnares him!

A video recap of last week’s main event showed additional footage not seen during the broadcast. Tessa Blanchard revived the referee that got speared during the Beast-Jungle Grrrl match and rolled him back into the ring, where a reluctant Beast covered the unconscious Jungle Grrrl (who was taken out from behind with a briefcase by Blanchard) to get the win. Afterwards, The Beast tracked down Blanchard in the back and demanded she sign a contract for a title match.

Next a video was shown of Blanchard barging into the office of David McLane. Blanchard said she’s there to talk about her match for tonight. An excited McLane asked if she finally signed a contract for a match with The Beast. Blanchard said she hadn’t and that The Beast doesn’t deserve a title shot. McLane said Blanchard has to stop handpicking her opponents, which Blanchard denied doing. McClane says he knows about the deals she makes with The World’s Greatest Attorney Sophia Lopez, but Blanchard denies again and says she’ll fight the next person who walks through his door. Reyna Reyes then knocks and enters, and Blanchard tells McClane there’s his main event and leaves. McClane then asks Reyes what she wants, and Reyes replies that Sophia Lopez told her he wanted to see her. Chicanery!

Jungle Grrrl then came to the ring to a mixed reaction. She got on the mic and said it took two people to beat her last week, and that no one could beat her one-on-one. She told The Beast and Tessa Blanchard if they’re going to conspire against her to just come out together at the start. She then asked for some competition. Following a commercial break, Sassy Massy came to the ring.

A video was shown outside of Jessie Jones and Amber O’Neal’s locker room. An off screen Lana Star explained to her new protege Faith The Lioness (also off screen) that they need to do things “the Lana Star way”, and they covered up the sign for Jones and O’Neal’s locker room with one for the new twin team of The Dixie Darlings. The Dixie Darlings then arrived, excited to have their own locker room, and entered. Jones told the new team to leave, stating fans aren’t allowed in the back. The Darlings replied “Do we look like fans” and said they’re The Dixie Darlings. Jones and O’Neal were unimpressed and kicked the twin duo out. The Darlings left, but then slid the sign with their name on it under the door with their autographs on it, Jolene and Jolynn. O’Neal asked “like the song?” as Jones ripped up the sign from the “stupid twins.” (side note – I met The Dixie Darlings at LA Comic Con and I may be out 6-8 weeks!) 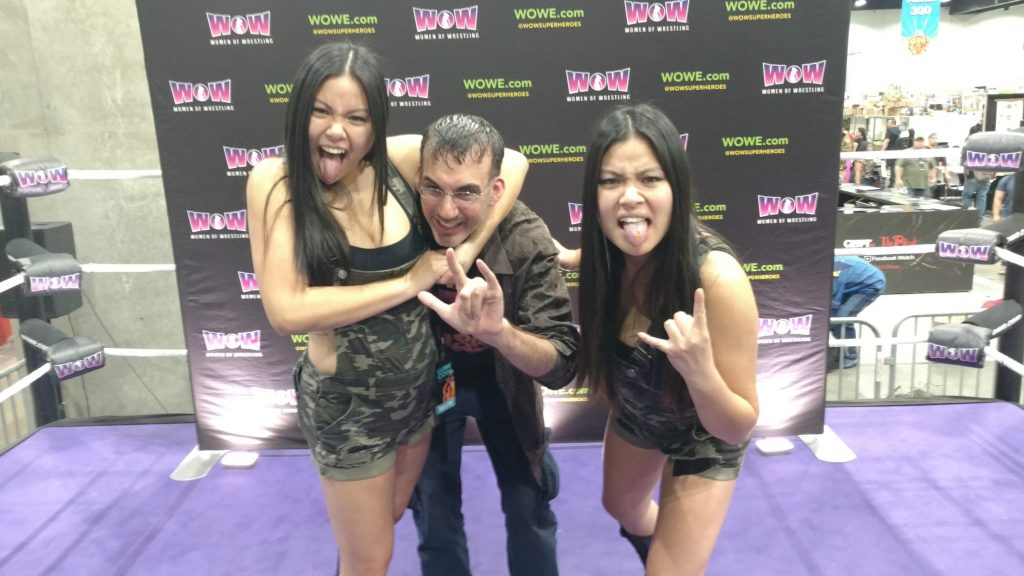 Following a Tessa Blanchard promo/commercial for WOW, a video package was shown of all the bad blood between Stephy Slays and The Governor’s Daughter Abilene Maverick, noting Slays finally gets another shot at her long time tormentor. But when Maverick was announced for the next match, she came out in fancy street clothes and a neck brace. Commentary doubted the legitimacy of Maverick’s injury, noting last time they saw her it was her leg that was supposedly injured. After Slays got in the the ring, Maverick grabbed the mic and whined about her ailment to both Slays and the audience, citing she got hurt during “a freak injury skiing at her family’s lake house.” Maverick then announced she found a substitute opponent for Slays, someone that could “teach her a lesson.” From out of nowhere, The Disciplinarian ran into the ring and attacked Slays from behind.

Match Two: Stephy Slays Vs The Disciplinarian (with Samantha Smart)

After months of being bullied, @wow_stephanie was finally going to get her shot at revenge against The Governor’s Daughter, @wow_abilene ….or so we thought …😱.#WOWSuperheroes pic.twitter.com/mrYEIvmAGN

A video package was shown of Siren The Voodoo Doll and Holidead. Siren continued her dark courting of Princess Aussie, stating that “darkness awaits her on it’s throne.”

Match Three: The Monsters of Madness (Havok and Hazard) Vs The Dixie Darlings (Jolynn and Jolene)

A video package was shown of Reyna Reyes ahead of her title shot against Tessa Blanchard, highlighting the odds she’s had to overcome to get to this match tonight.