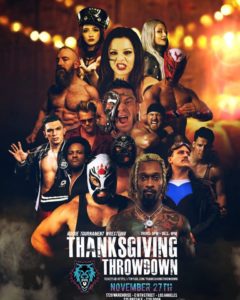 Happy Belated Thanksgiving, hope you had a fantastic holiday! My Thanksgiving got kicked off in glorious style at Rogue Wrestling’s Thanksgiving Throwdown. I covered Rogue Wrestling’s previous show back in June, and that show as well as their first show are now available in their entirety on Rogue Wrestling’s YouTube channel. Subscribe to their channel now so you can watch this show when it’s available, and if you just can’t wait to find out what happened I got you covered with a recap and some miscellaneous notes of all the incredible action!

WINNER: Hiro, Panda, and Loco won via a roll-up from El Mariachi Loco.

WINNERS: Vipress and Priscilla Kelly won via a Kelly sunset flip bomb (preceded by Vipress using a headscissors takedown to throw Luke Hawx into a chair propped up in the turnbuckles).

@priscillakelly_ is here at @_RogueWrestling ready to defend the tag team titles with @_vipress! pic.twitter.com/Jb1vcZOetJ

One more from the @MrGMSI_BCage and @alexhammerstone match. This was a phenomenal back and forth match and if you weren’t lucky enough to be there you have to watch it whenever @_RogueWrestling makes it available! pic.twitter.com/57q2jyObQb

It was utter chaos in the main event last night at @_RogueWrestling with @DashingChrisBey vs. @Razerpops vs. @MrGMSI_BCage going at it for the championship! Check out this action! pic.twitter.com/OqRGTHStuD