For the better part of four and a half years, Ivelisse has been with Lucha Underground and she has been a former two-time Trios Champion. But things have not been going as good for her as of late and she recently took to Twitter to express her frustration with the promotion. Ivelisse posted on Twitter that she has been asking for her release from the promotion for over a year now and it was promised to her if she did Season 4, but it just keeps on getting turned down. She then described her situation as being held hostage by Lucha Underground, as you can see in her tweet below:

You are comparing apples to oranges. LU is NOT a Wrestling Company. It is merely a TV Show, one that films randomly without guarantee, theres is NO comparison at all.

This isn’t the first time that Ivelisse has had problems with an employer as she was fired by The WWE in 2012. She had problems with then-NXT Trainer Bill DeMott and reported him to WWE for mistreatment. Ivelisse was then released shortly thereafter while DeMott would also resign in 2015 after more reports of misconduct.

Ivelisse got her first big break in wrestling with WWE’s Tough Enough in 2011. She parlayed that into a developmental contract and lasted about one year with the company. She has mainly wrestled on the indie scene since then and has also had a run with IMPACT Wrestling from 2012-2013. 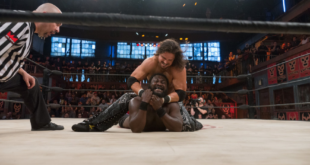