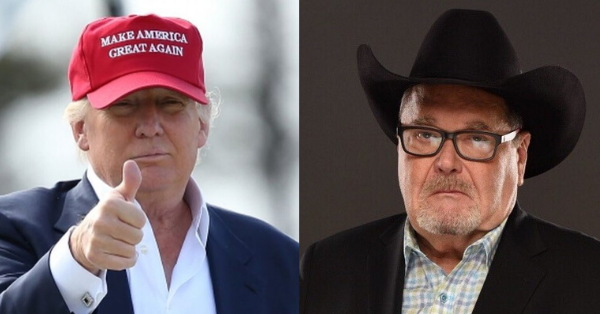 On his podcast Grilling JR, Jim Ross talked about Donald Trump’s appearance at the 2000 King of the Ring. He also says that he believes that Trump got the idea of wearing Make America Great Again (MAGA) hats from watching Steve Austin wear them.

Vince did a hell of a job trying to humanize Trump as being at ringside with a bunch of other wrestling fans, and then I’ve always said that Trump, one of the reasons that Trump wore his cap during the last campaign, it said Make America Great Again, is he got the idea off Stone Cold’s caps. I believe that.”

“He saw how Austin was responded to and somehow or another he corralled that to, he could be more every day guy and not the son of a rich real estate developer in New York City. Silver spoon. Special schools. All this other shit. He can be more normal, more blue collar, by wearing a baseball cap. Never have been any time that I’ve seen, maybe a picture of him playing golf, that he ever wore a cap.”