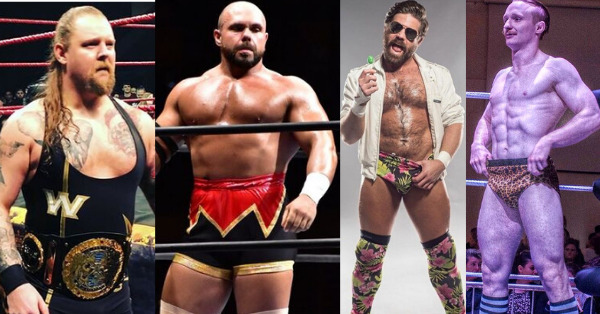 Several men and women have been speaking out recently against sexual assault in the wrestling industry, as people like Jim Cornette, David Lagana, David Starr and Matt Riddle among others have been accused of sexual misconduct. More accusations are coming out as WWE Superstar Jack Gallagher, NXT UK’s Wolfgang, Impact Wrestling’s Joey Ryan & Michael Elgin have all been accused recently.

“I never thought this is something I would say publicly, but I want others to know that they never need to be ashamed and should feel like they can tell their stories. On New Year’s Eve 2014 I attended a house party and Jack Gallagher (Gentleman Jack) was there. Jack got me drunk. While I acknowledge that I am an adult and can make my own decisions, he was literally pouring straight spirits into my glass, putting it to my mouth and telling me to drink. When I would make myself a drink he would add more alcohol when my glass was unattended. I thought I was in a safe environment and didn’t need to shield my glass.

Jack asked me to sit on his lap, I said no. He then sat on my lap and made advances. The entire time I expressed that I was uncomfortable, but I also didn’t want to make a scene. In hindsight I should have. At the end of the evening I went to the bathroom and Jack barged into the room. I immediately stood up and tried to pull my skirt down. Jack grabbed me and he pulled at my skirt. He pulled so hard he ripped my skirt. I managed to push him away and I left the room, I then immediately left the party. I spent years afterwards downplaying the story, trying not to cause any issues. I’m not going to be silent any longer.”

It’s time I said something. This kind of behaviour isn’t acceptable #SpeakingOut pic.twitter.com/bIiwjywiqZ

A woman wrote of Wolfgang:

“After years of the emotional torture that I’ve went through, self harm and mental illness due to the emotional abuse suffered at the hands of one of WWE NXT’s “Superstars”, it’s time I #SpeakOut #SpeakingOut.

I’m not one for posting so publicly on the internet but today I woke up to a message from a close friend with regards to the #SpeakingOut movement in the wrestling scene on Twitter and I have carried this emotional burden with me for years and have since battled with self-harm, mental illness and I’m yet again on the waiting list to see psychologist, I feel like it’s time to share my experience. I was involved in professional wrestling for about 5-6 years a trainee and a valet. In that time, I was engaged to a now WWE NXT professional wrestler, Barry ‘Wolfgang’ Young. During this period, I was an absolute shell of myself due to the emotional abuse I suffered in that relationship. He wasn’t physically abusive with me in that time but he was extremely emotionally manipulative and I caught unsolicited photographs of school girls on his laptop and on his camera memory cards from several occasions, including one he admitted to driving to St. Mungo’s Academy and waiting for the school to finish and proceeded to take photos of school girls as they left. I know a lot of people will be incredibly shocked by this due to the ‘Good guy, couldn’t do more for you’ facade and probably will be a lot of questions regarding why I didn’t come out sooner – but I was so fucking emotionally abused that I feared for my life and it’s taken me a very long time to realize I wasn’t at fault.”

After years of the emotional torture that I’ve went through, self harm and mental illness due to the emotional abuse suffered at the hands of one of WWE NXT’s “Superstars”, it’s time I #SpeakOut #SpeakingOut pic.twitter.com/yGraNI96Qz

Another woman said of Michael Elgin:

“Who wants to see Mike Elgins dick pic? I still have the convo, unwanted photo, and emails he tried to send me under a fake name in 2016. @JordynneGrace tried to help me bring this to light when his first scandal came out but the wrestling media didn’t care #SpeakingOut”

Who wants to see Mike Elgins dick pic? I still have the convo, unwanted photo, and emails he tried to send me under a fake name in 2016. @JordynneGrace tried to help me bring this to light when his first scandal came out but the wrestling media didn’t care #SpeakingOut

“Hey y’all. One time I was picking up Joey Ryan from the airport and he like groped my thigh and chest WHILE I WAS DRIVING. Tried to get me to go to his hotel room; and then kissed me to convince me to do so. I told the promoter of the show (who was also the man responsible for a good amount of my training because I was attending his school at the time). I was doing the airport pickup for about this and he said he was so sorry that he felt terrible that he put me in danger like that. He promised me he would never book Joey Ryan again. LO AND BEHOLD A YEAR AND A HALF LATER, he books Joey Ryan. I can’t believe I trusted him.”

Previous Matt Riddle Accused Of Sexual Assault, WWE Issues Statement
Next TJ Perkins Claims He Was Taken Advantage Of By Female Wrestlers When He Was 15