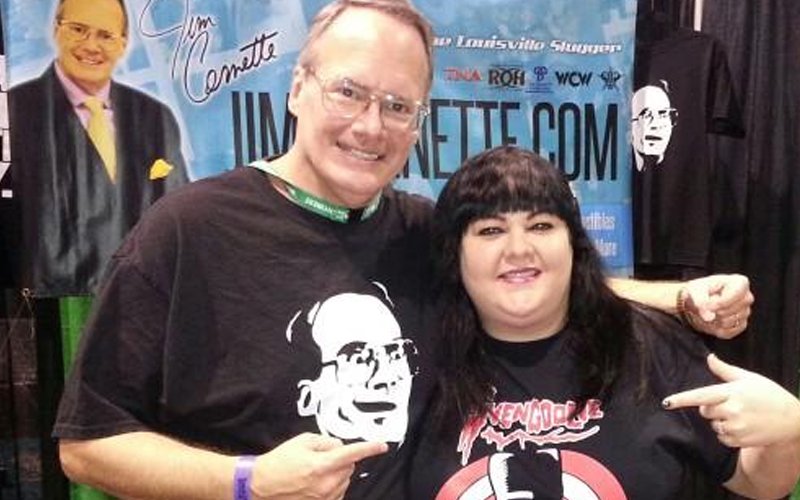 Jim Cornette and his wife Stacey have been accused of sexual misconduct by independent wrestler Phil Early, who took to Twitter to talk about it. He claims that Cornette’s wife Stacey, who used to work in OVW as Synn, attempted to groom him early in is career. She sent him unasked for lewd photos attempting to groom him for sexual purposes. Ealry alleges that Cornette would require certain OVW talent to “perform sexual acts on his wife, many times with him watching.”

Early said that a close friend of his was “groomed and basically brainwashed by them for YEARS. When he finally escaped, Stacy went to great lengths to not only terrorize him, but to actively try to have other wrestlers physically assault him.” Stacey supposedly sent him pictures that showed his friend’s tires slashed and bragged that she could make sure he lost his job and apartment. She would also brag about having protection from the Kentucky Wrestling Commission.

Earley shared several screenshots from Stacey that would back up his story. Unfortunately we were not able to post all pictures below due to some having censored nude pictures, but you can check it out here if you are interested.

Former OVW Heavyweight Champion added to the allegations by posting that Cornette “sent Stacy after me to recruit me.” Earley also retweeted a user who said that they “personally watched Jimmy and Synn chase an 18 or 19 year old hostess at cheddars, offering alcohol among other things to get her back to the ‘hot tub’.” Body Guy who is also an OVW alumi backed up the allegations by Earley.

She approached via DM, sent me lewd photos I never asked for, implied protection from the Kentucky commission (stating he was a family friend), and told me she WAS going to fuck me, as if I didn’t have a choice.

My experience with them is tame compared to others, though /2

A close friend of mine was groomed and basically brainwashed by them for YEARS. When he finally escaped, Stacy went to great lengths to not only terrorize him, but to actively try to have other wrestlers physically assault him.

Stacy bragged about being able to call the Kentucky commission to give him “targets”. He was a family friend, and if she wanted, she could turn his attention to anyone licensed in the state to potentially hurt, and sometimes even ruin their careers

They used their place of power to hurt many, many people.

No one wants to speak up because of his position in wrestling, but this is EXTREMELY common knowledge among OVW alumni.

This will probably ruin a lot of opportunities in wrestling, and that’s fine, but make no mistake: Jim Cornette is trash. He and his wife have made power plays in order to hurt many, many people.

Fuck you Jim. Fuck you Stacy. You are scum.

More people are coming forward and more will CONTINUE to come forward because I’m. Not. Lying. https://t.co/kzjbdv03vo

I’m not backing down. The things I said she did and tried to get me to do are all 100% true. pic.twitter.com/5qfbPDi46V

Now she’s saying I photoshopped the messages and that she doesn’t even know me. pic.twitter.com/ebceTEOzu0

Years later Jim Cornette decides to tell his listeners that he doesnt believe one legged wrestlers are believable. He was part owner of OVW at the time of the shows I just mentioned. Hes a piece of shit and a coward.

@AKI_Evolution personally watched Jimmy and Synn chase an 18 or 19 year old hostess at cheddars, offering alcohol among other things to get her back to the “hot tub”.