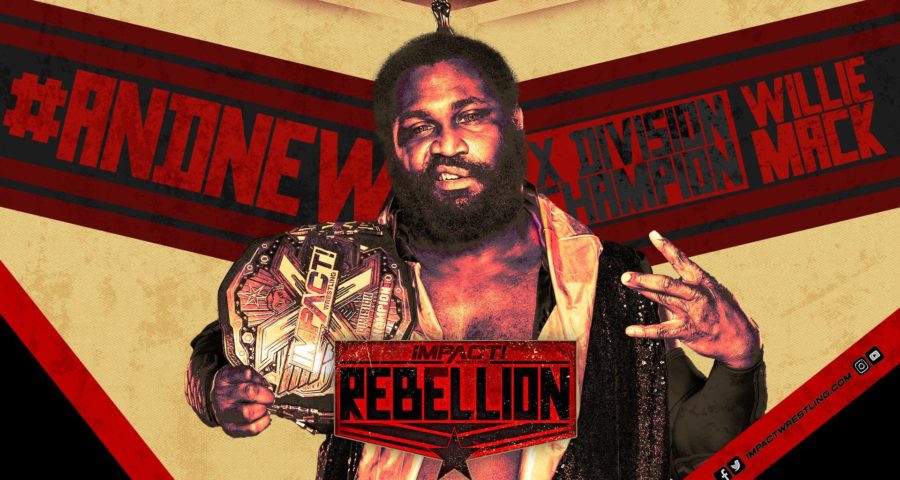 Check out the highlights or listen to the whole interview below.

“Oh, it was sweet! When I used to watch the Wednesday night pay-per-views and spent my $10 bucks, I saw guys like AJ Styles and then Amazing Red and Jerry Lynn and all the greatest of the X Division. Even back then, when I was just a fan, I said, “That’s the division I want to be a part of!” Here I am now, 20 years later, as the X Division Champion!”

Willie Mack on wrestling in front of no crowd at Impact Rebellion:

“Eh, it reminded me of my early days in the business. Not everyone gets to perform in front of 15, 20,000 people at first. I’ve wrestled in places where there were like 5 people in the crowd. It don’t matter if there are 5 people or 25,000, I’m going to do my best to entertain them especially with what is going on right now in the world, with COVID-19, I want people to forget about everything else except what is going on in the ring when I’m in there. If I can take away people’s stress, I did my job, i guess! (laughs)”

“He could be the next big thing. He’s a great competitor for not being in the wrestling ring for too long. Going after people’s mama’s and wives… That is what is going to get him beat up! But, if he goes down a different road, he is the future of wrestling.”

Willie Mack on what makes the X Division special:

“Everyone was stuck in the “We have to have a Cruiserweight Division”, or the in-between. They mixed it all together and the hybrid style has come into play. You’ve got the Luchadors and you’ve got the Strong Style and it all slips up into the X Division category. No weight limits, no time limits. Everything goes into it.”

Willie Mack on if he would defend the X Division Title against RVD:

“Yeah, if he wants some. But, I don’t think he’d want to do that. He knows I have to get him back. He got me last time. When you wrestle RVD, he’s really got no plan. He just does whatever! (laughs)”

“It was great. We usually hang out and hit the towns together. The last few times, I was on my own. But when he came back, I was like “Oh hell yeah!” Now I’ve got someone to chat with and mess around with in the locker room. Hopefully he is back in the ring real soon and can do what he loves to do. I know he’s missing it a lot!”

“Swinger is someone you’ve got to get used to. You know that Uncle that nobody invited to the Christmas party that shows up and says, “You try this potato salad? This potato salad is good!” Ain’t nobody asked for his opinion. (laughs) That is what Johnny Swinger is.”

Willie Mack on if he still has his sights on the tag team championships:

“Yeah! Just because you got one (title), it fuels the fire to want more. That was the goal but it got changed a little bit due to his (Rich Swann’s) injury. But, hopefully he’s back at 100%, which I know he will, and we can go after those guys (The North).”

Willie Mack on if Lucha Underground was his springboard to fame and Impact Wrestling:

“I wouldn’t say it wasn’t. It was a nice production and people were really, really watching. Other companies took notice. I think that was a big step towards me getting to Impact. And, I love where they have us going.”

Willie Mack on if he enjoys the cinematic approach to wrestling:

“Yeah. That is what we did in Lucha Underground. You come in as a wrestler and then you find out it is a TV production and you’re doing vignettes one day and having matches the next. Then you see it all come together like how the movie magic works! It is amazing! And, it is a different take instead of just wrestling, wrestling, wrestling. Then you get the theatrical side and that is amazing. Then, you’ll get someone who doesn’t watch wrestling but watches horror movies… You’ll get that audience too!”

“It don’t really phase me that much. She’s a person and she did what she had to do to become World’s Champion. That’s something people didn’t think they’d see happen in their lifetime but it happened! We’ve seen an Intercontinental Champion who was a woman (Chyna), we saw a WCW Cruiserweight Champion who was a woman (Madusa), and we saw Jacqueline as Cruiserweight Champion! So, it was about time! One of them finally stepped up and finally did. That’s a good moment that will never be erased from history. And, we lived it! (laughs)”

Willie Mack on the current momentum Impact Wrestling has:

“I think it is going good! Kicked off Rebellion, new champ! There are lots of new people showing up. AXS TV is the platform… And Twitch! There is no reason to say “I can’t watch Impact” now. You’ve got Internet and you’ve got television so it is right there in front of you. You can even watch on Playstation! I know a lot of people are playing video games right now!”

Previous Big Show on WCW & WWE Debuts, Why He Didn’t Have Entrance Music in WCW, Dungeon of Doom, & More
Next Jim Ross On John Cena’s Legacy, Belongs on The Mount Rushmore of WWE Stars