Breaking News
Home / Japan/WWE / Will Ospreay On Almost Participating In The Cruiserweight Classic, Why He Declined, His Interests in WWE, & More

Will Ospreay On Almost Participating In The Cruiserweight Classic, Why He Declined, His Interests in WWE, & More 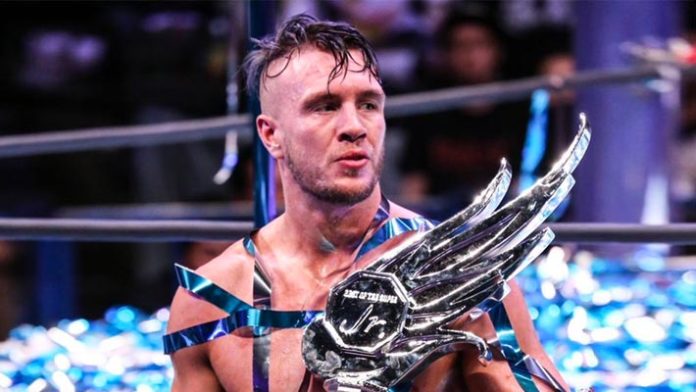 Will Osprey recently joined Chris Van Vliet for an interview where he discussed several topics, including almost participating in the WWE Cruiserweight Classic back in 2016, deciding on NJPW over WWE, declining the CWC, his interest in joining WWE, and much more.

Will Ospreay on almost participating in the Cruiserweight Classic:

“Yes I was [close], but not really. Like nowhere near, to be honest. It was just phone calls, it was just like [William] Regal called me while I was filming a commercial for Virgin Trains or something like that. And he was just like, ‘Do you fancy doing the Cruiserweight Classic, we have this tournament happening, you’ve got to be under 205 lbs.’ And I was like, ‘I mean, I’m interested yeah but I am going to New Japan in April.’ And there was nothing signed saying that I was legally New Japan’s property at that time, it was just, ‘Yeah, I’m doing this, would you have a problem if I did New Japan?’ And then Regal just drops the one line where he’s like, ‘Let me ask Triple H and I’ll get right back to you.’ And me being the kid, I’m like, ‘What the f**k is going on?’

“So it was just one of those things where Regal asked Triple H, and he was like ‘Yeah, I’m fine with him doing New Japan, I’m fine with him doing the Super Juniors and then he can come do the Cruiserweight Classic, and then he’s free to do what he wants to do.’ But then as it started getting closer to April, there was a call in February — no, March, in fact. And they said that they wanted me full-time, and I would have to go over there and be a part of the system. And I kind of wasn’t ready for that, for me.”

Will Ospreay on deciding between WWE and NJPW:

“So it was a case of, in March of 2016, it was a choice of going to WWE, New Japan or TNA. And TNA for me just wasn’t an option at the time, I just didn’t want to go there. And it was between these two. And I talked to my mom, and obviously my mom’s like, ‘Well I know WWE. I don’t know what a New Japan is.’ But I know. I know where Finn Balor came from, I know where like all these guys are come from … so in my mind, my best bet is to go there, learn the tricks of the trade, see what happens. And in my first year, I was like, ‘This is the place for me.’ Everything, I was like, ‘This is it.’”

Will Ospreay on declining the Cruiserweight Classic:

“And I told Regal, I was just like, ‘I’m sorry dude, I’m not ready to sign on.’ And then he was like, ‘Do you want to do the Cruiserweight Classic anyway?’ And I was kind of like, ‘I don’t really want to do something unless I’m 100% committed to it, and I’m just not so I’d rather just go to New Japan.’ And they were completely understanding. And there has been phone calls since, but I’m just not interested. Especially what their current product is, I’m just not interested at all. Until things start to change, I don’t think I’ll be interested to go to WWE at all.”

Previous Triple H On NXT UK, Realizing How Much Talent Is Out There, Plans For Another Mae Young Classic
Next AJ Styles Shares His Thoughts On WWE Been Considered An Essential Business, Just Wants To Work

Koji Kitao Passes Away At The Age Of 55