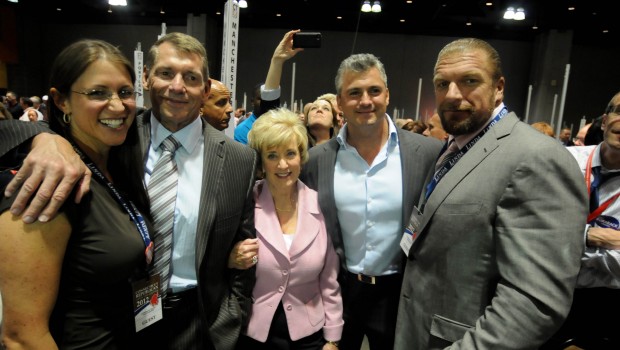 On Wrestling Observer Radio last night Dave Meltzer commented that there may be a bit of a struggle at the top of WWE creative between HHH and Vince McMahon, or at least a clash of booking styles.

Dave Meltzer’s sources are almost always anonymous tipsters from within the WWE or other organizations, and there have been times when it seems the information given to Meltzer is not entirely accurate (more often than not he is correct however), so take this with a grain of salt:
Meltzer mentioned that Vince may not like being seen as old and out of touch, and some of the ideas that HHH pushes for might not be things that Vince would necessarily want to happen on the show.  The example of Kevin Owens defeating John Cena on his first night was mentioned as an example, with Cena getting his win back possibly having been done because Vince didn’t like the idea of a guy like Kevin Owens defeating a guy like Cena.

The speculation goes even further however, and begins to involve Shane McMahon.  Vince has stated that there may be a future corporate role for Shane to play at the company.  It was 8 years ago that Shane left the company allegedly due to a power struggle that was won by HHH and Stephanie McMahon regarding direction of the company.  Shane being brought back to the company might be an attempt by Vince to take away some of the power that Steph and HHH had from being considered the future of the company.

In another move, Ryan Ward, the head writer for NXT will now be moved up to Smackdown to work on creative there, fueling more speculation that there may be a brand split occurring after Wrestlemania, with HHH and Stephanie running Smackdown and Shane O’Mac running Raw.  How much of that is storyline and how much of it is real life is anyone’s guess.

Previous GSP vs Nate Diaz at UFC 200?
Next Lucha Underground to Netflix?