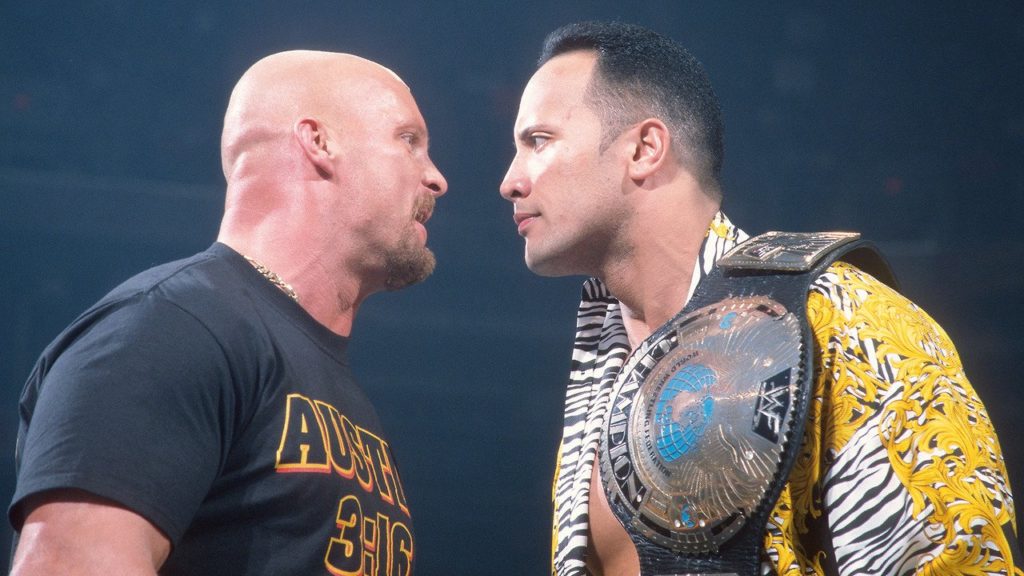 Recently Austin had an interview with ESPN’s Peter Rosenberg where he talked about his feud with The Rock. The feud led to a trilogy of matches that took place on WrestleMania XV, X-Seven, and XIX. We have included a few highlights, and the full video interview below.

Steve Austin on his feud with The Rock:

“Well, [WrestleMania] 15 was a good match, and of course me and The Rock had instant chemistry. We both loved working with each other and got along like gangbusters, you know, in the ring, out of the ring, you know, everywhere.”

“So 15 was really cool and for Jim Ross to call that match, but, you know, I was mad at 15 because I was going through a h— of a divorce, forgot my d— ring vest and so I had to walk to the ring in a T-shirt. And you never want to walk to the ring in a t-shirt when it’s WrestleMania, and you wanna look like a million bucks in full gimmick. You know, you’re not trying to sell a t-shirt, you’re trying to put on a show.”

“[…] so to go there and do that great buildup with The Rock and, you know, Jim Ross, we did that sit-down conversation in the locker room, that pre-match package, that build package they put together has never been duplicated with that Limp Bizkit song, it was just off the charts to set an attendance record at WrestleMania and take the crowd on that ride. […] And to be the main and to be able to go out there and have that kind of match between two of the hottest guys that were on planet Earth in the wrestling business was really, really cool.”

Steve Austin on WWE’s decision to continue with WrestleMania 36:

“[The] show must go on. You know, way back in Kansas City, Owen fell to his death, the show went on, so, you know, that’s his mentality. And God rest his soul but you know, it’s tough.”

Previous Ken Shamrock On His Returned To Pro Wrestling, WWE & AEW, More
Next Jake Roberts On His Theory Behind the Montreal Screwjob, Tension Between Shawn Michaels and Bret Hart