It’s been a confusing couple of weeks globally, but especially here in the U.S., as our way of life has been drastically altered. Despite that, there’s still a couple of companies out there committed to providing us some quality entertainment. I wish WWE was one of them. I was very receptive to last week’s episode of SmackDown from the Performance Center, but that stemmed mostly from an understanding that the less than ideal circumstances were thrust upon them rather abruptly. This week however, with more time to prepare, I didn’t expect to get the subpar product we received. The show wasn’t all bad. There were definitely bright spots, but when it was over, I felt a little disappointed. The star power was there with the likes of Goldberg, Roman Reigns, Paige, Daniel Bryan, and newly signed Rob Gronkowski all playing big roles, but the presentation was lacking in my opinion. Here’s some of the good, and bad things that stood out to me. 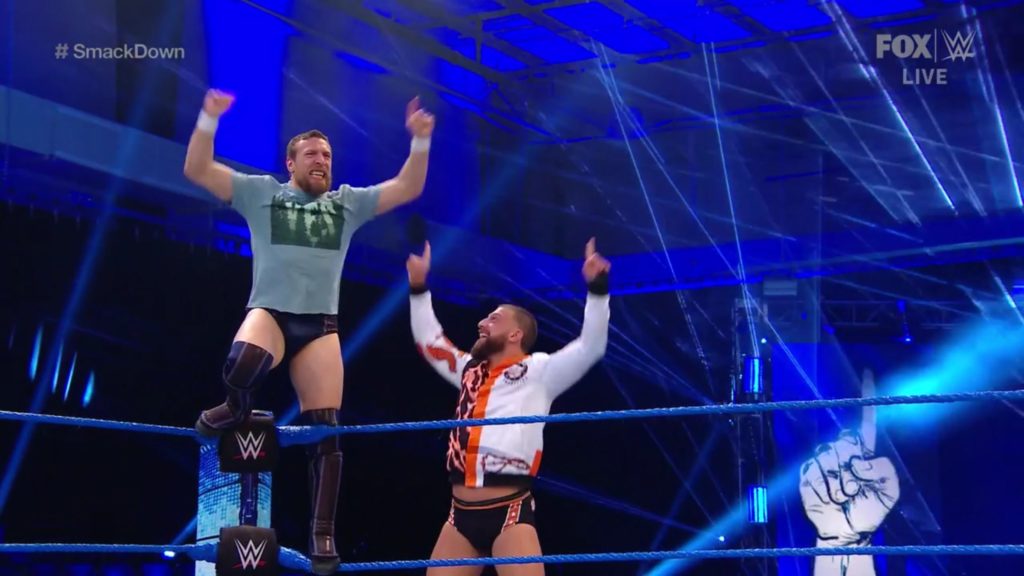 1. The Daniel Bryan, Drew Gulak story continues: Last week, we saw Daniel Bryan and Drew Gulak form an alliance, and mix it up with The Artist Collective. This week, we had more of the same with Bryan and Gulak taking on Cesaro and Shinsuke Nakamura in a tag team match. The match itself was very enjoyable, and the type of solid performance you’d expect from the 4 performers in the ring. The exciting, yet slightly confusing part came in a backstage segment after the match where Daniel Bryan challenged the WWE Intercontinental Champion, Sami Zayn, to a Title match at WrestleMania. Zayn accepted under the stipulation that Gulak could defeat Shinsuke Nakamura in a one on one match next week. This is confusing only because we never got any type of conclusion to the Braun Strowman/Artist Collective feud. Zayn won the Intercontinental Championship from Strowman at Elimination Chamber, and then entered a program with Bryan and Gulak without any explanation. As a matter of fact, we haven’t even seen Strowman since Elimination Chamber. Despite that, I’m actually really excited for next week’s match between Gulak and Nakamura, and for the prospect of a Zayn vs. Bryan Title match at WrestleMania. 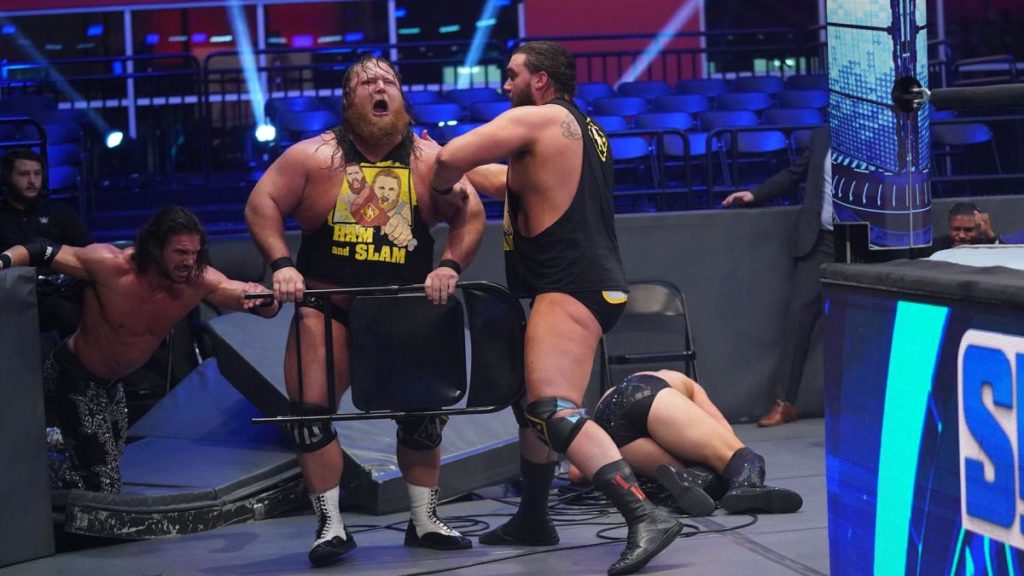 2. Miz and Morrison vs. Heavy Machinery: We got another edition of The Dirt Sheet this week, as The Miz and John Morrison attempted to sprinkle some comedic relief into the show. I wasn’t really a fan of their impersonations of The New Day, The Usos, or Heavy Machinery, so when Tucker and Ottis came out for a match with them, I was less than excited. That quickly changed when the bell rang though. I was pleasantly surprised with the solid match we got. I was honestly expecting a short, sloppy, match with a Dolph Ziggler run in. We got the Ziggler run in, but by the time he came out to join Micheal Cole on commentary, we had already gotta a very entertaining match. Not surprisingly, Ziggler was involved in the finish, sending Ottis into a rage when he showed him pictures of himself with Ottis’ crush, Mandy Rose. Ottis convincingly “snapped” and got his team disqualified after striking Morrison with a chair. I’ve been hot and cold with the Ottis, Ziggler, Rose love triangle storyline. At first, I wasn’t too into it. I eventually came around, but now it unfortunately seems destined to be paid off on the WrestleMania Kick Off Show. The only thing I’m curious about is whether we get a Heavy Machinery vs. Dolph Ziggler and Robert Rude tag match, or an Ottis vs. Ziggler singles match. I think I’d honestly be more captivated by the latter. I guess next week will be very telling. 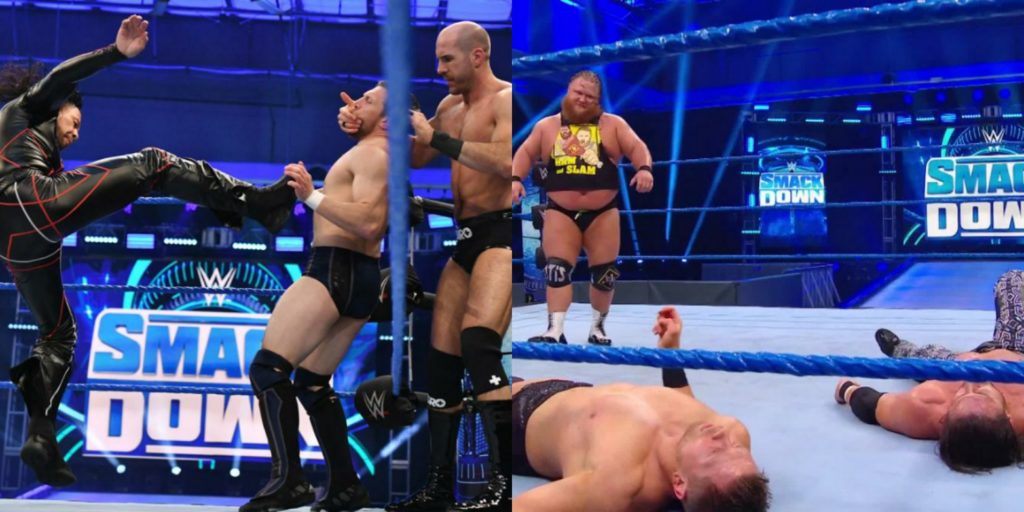 3. Match length, match quality, and solo Michael Cole: One of my biggest dislikes from last week was the length of matches. I was pretty disappointed by how short and basic they were. This week saw a significant improvement in that area. The matches were hard hitting, well paced, and had good solid finishes. After being paired with Triple H last week, I was a little disappointed at first with Michael Cole flying solo. Surprisingly though, Cole channeled his inner Joey Styles, and did a great job calling the action alone. Michael Cole really does get a bad wrap. For years, we’ve all been so obsessed with the fact that he isn’t Jim Ross, and the fact that he’s obligated to promote storylines rather than call the action in the ring. We’ve forgotten how good Cole actually is at doing play by play. Cole did a superb job of keeping the show flowing, and even made me forget for a second that he didn’t have a color commentator with him. It was a commendable performance, but where in the world is Corey Graves? 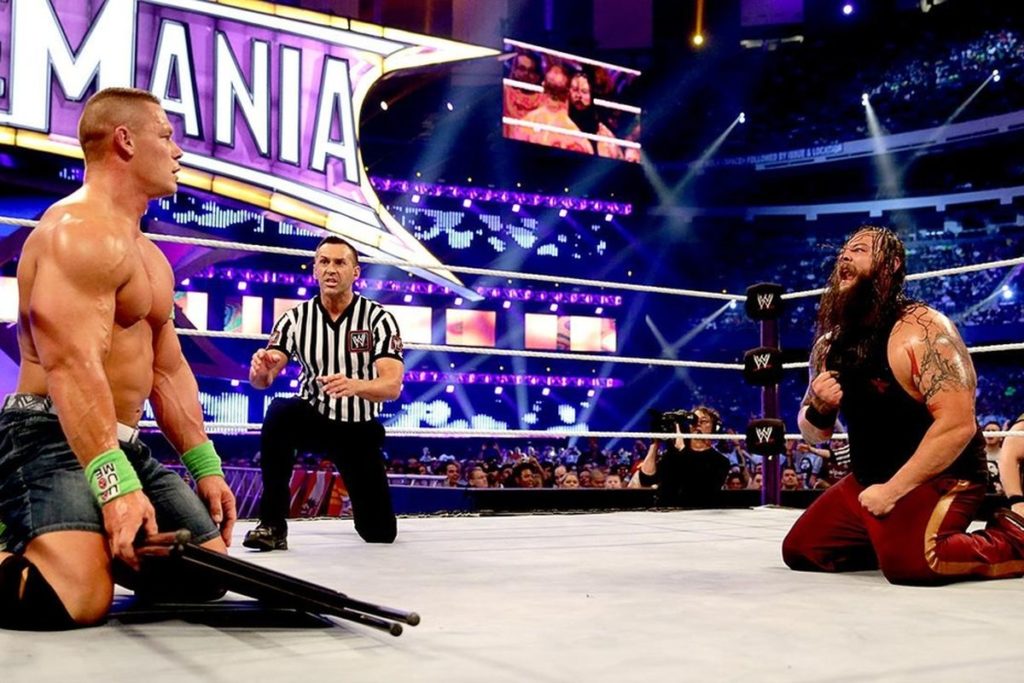 1. John Cena vs. Bray Wyatt WrestleMania XXX: I want to start by saying that I understand that the circumstances for producing a live weekly show are less than ideal right now. However, this is getting so ridiculous now. Are you telling me the supposed “Worldwide Leader in Sports Entertainment” can’t seem to figure out how to work around an empty arena? How embarrassing is that? Last week got a pass because I understood it was short notice. This week gets no pass. I don’t want to see a replay of a match that I already saw months, or even years ago. I don’t care if it gets us ready for an upcoming match, or not. It reeks of laziness. I’ve tried very hard to keep comparisons out of this article, but how did AEW manage to deliver a great, action packed show this week, while WWE delivered 3 shows of filler? Does that sound right to anyone? I don’t get it. WWE has the talented performers to absolutely knock it out of the park on any given night, empty arena or not. To replay an old match is annoying to those of us loyal viewers that have already seen it, multiple times. People are tuning in right now for an escape, not for matches they can just watch on the WWE Network. Stop being lazy WWE! 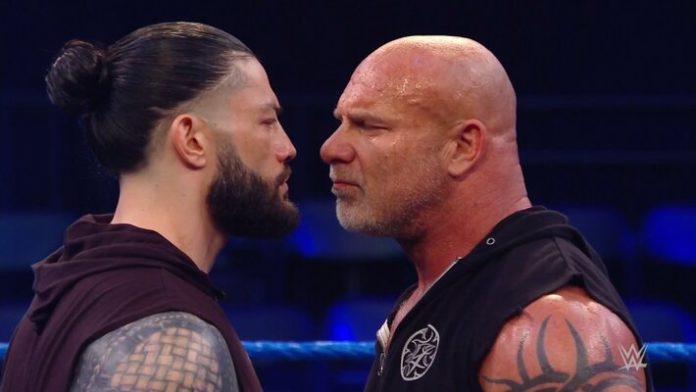 2. Goldberg and Roman Reigns make it official: Last week, I said I’m ready to see “The Big Dog” take the Universal Championship from Goldberg. This week, I’m going to say that I’m ready to get it over with. I tried to be optimistic about this match, but I can’t really fake it much longer. The closing segment of this week’s show completely fell flat to me. Goldberg looked like an old man, and even spoke like one when he hit Roman with the classic “Listen, punk!” As far as Roman goes, his promos actually resonate more with me when there isn’t any fans. His intensity seems to come through a bit more. What didn’t work for me was Roman listing all the big names he’s defeated. I get it for storyline purposes, it makes him seem like a very big deal, but from a reality standpoint, it’s just a reminder of how many big names have tried, and failed, to get Roman over. I’m team Roman in this scenario, but I can’t honestly say I’m excited for anything about this feud, other than for it to end.

3. Only 2 matches: Just sit there and think about that for a second. A 2 hour wrestling show with a primetime slot on network television only had 2 wrestling matches on it. In the iconic words of Hurricane Helms, “What’s up with that?” This blows my mind, and simultaneously doesn’t surprise me at all. Vince McMahon should just drop the word “Wrestling” from his company name, or at least put it behind “Entertainment” because that’s clearly all he cares about. These empty arena shows should be where these “superstars” show the world what it is they can really do. With nothing but time to kill, we should be getting 15-20 minute mat classics. What do we get instead? We get Rob Gronkowski, and modern day Brutus Beefcake (Mojo Rawley) making a fool out of Baron Corbin. We get The Miz and Morrison’s horrible, and borderline racist, attempt at cosplay. We get long replays from matches we’ve already seen. Again, this baffles me. How can AEW manage to pull off a great empty arena show, but WWE can’t? How can a man who’s dominated this business for decades be so tone deaf? There’s no sports whatsoever on television right now, this should be the time when WWE goes all in, and attracts new fans. Instead they seem satisfied with maintaining the status quo. Meanwhile on TNT, Cody and the boys are doing everything in their power to put on a great show for everyone stuck at home, and they’ll gain some new fans in the process. I demand a lot from WWE, because they’re absolutely capable of delivering it. This show was a putrid effort on their part. Next week promises to at least be a bit more enjoyable, with 3 matches already announced, but they need to cut down on the filler, and just let these talented performers do their thing.