Breaking News
Home / WWE / Shotzi Blackheart On Keeping Her Name In NXT, The Trevor Project, Time In The Indies, EVOLVE, Risks In The Ring & More

Shotzi Blackheart On Keeping Her Name In NXT, The Trevor Project, Time In The Indies, EVOLVE, Risks In The Ring & More 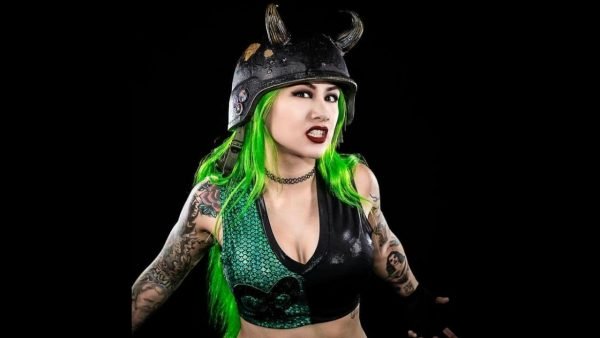 NXT Superstar Shotzi Blackheart recently did an interview with Sports Illustrated where she talked about several topics including her Tag Team Title match this week on NXT, the Trevor Project, her time in the indies, taking risks in the ring, keeping her name in NXT, and much more.

Shotzi Blackheart on her reaction to learning she’s part of the Tag Team Title match this week on NXT:

“The first thing in my mind were the amazing matches that Bayley and Sasha put on together against each other. They broke ground for women’s wrestling at [the first Brooklyn] TakeOver. I’ve always been a big fan of theirs. Bayley is from San Jose and I was born in San Jose. It’s all just really cool and really insane to me that this is happening.”

Shotzi Blackheart on plans for the match and showcasing herself:

“I like to go into a match balls to the wall, so that’s what I’m going to do. I like taking risks. I like to sling my body everywhere and just run wild.”

Shotzi Blackheart on proceeds from her new T-shirt going to the Trevor Project:

“I definitely want to give back, especially since it’s Pride Month. Recently, someone in the wrestling community committed suicide, and it was just heartbreaking to me. I dealt with a lot of depression as a kid, and I think that the Trevor Project is a beautiful thing and I really wanted to donate to that.”

Shotzi Blackheart on the risks she takes in the ring:

“I try to bring that Evil Knievel, daredevil spirit to the ring with me. That’s how I see my character. I kind of have tunnel vision and I just do it. I try not to think about it. It’s more, ‘This sounds crazy! Let’s go!’”

Shotzi Blackheart on her time in the indies:

“I got a lot of time on the indies to find myself as a wrestler and as a performer, and I’m really thankful for that. It gave me a lot of independence, and I’m a really well-rounded businesswoman because of it. Essentially, as an independent wrestler, you run your own business and you are your own business. I loved that. It was a lot of fun, it was silly at times, and it shows you how much heart you need to make it.”

Shotzi Blackheart on her time in EVOLVE:

“That anniversary show at the ECW Arena, I knew it was my time to show out. I knew that I needed to give everyone the taste of crazy. I’m very thankful for EVOLVE giving me that opportunity, and that ECW crowd is just so hot. It was so much fun.”

Shotzi Blackheart on why she chose to sign with WWE:

“It was always my dream to come to WWE. I didn’t really know about the indies or anything else, I just slowly fell in love with it. I love working here, I love the environment, the people I’m surrounded by, and how much I’m pushed. There is nowhere I’d rather be.”

Shotzi Blackheart on keeping her name in NXT:

“Deep down, within me, I had a feeling they weren’t going to rebrand me. I feel like, you just can’t. I’m just too loud. You can’t contain me too much. I did get told by a lot of people, ‘Oh man, you’re going to have to change your name, you’re going to have to change your gimmick. You won’t be able to do this or do that.’ So it was great to come here and learn that everyone was on-board with what I already had going on. I’d already done it on the indies, and it was working, so why mess with it?”

Previous Batista Reveals New “I Can’t Breathe” Tattoo, Comments On Pursuit of Justice
Next Steve Austin Response To Bret Hart Saying Austin “Would Get A Little Nervous, He Was Intense”