It was recently announced by Josh Barnett that Former WWE Superstar Santino Marella (Real Name: Anthony Carelli) has been added to his Bloodsport II Event which is being presented by GCW (Game Changer Wrestling). Bloodsport is an event wherein athletes from both Pro Wrestling & MMA come together and compete in head to head competition.

From Judo to Battlearts and MMA, this man has all the credentials for Bloodsport.

Anthony Carelli is coming to score the ippon Sept 14th. 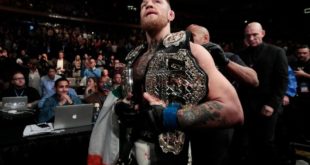