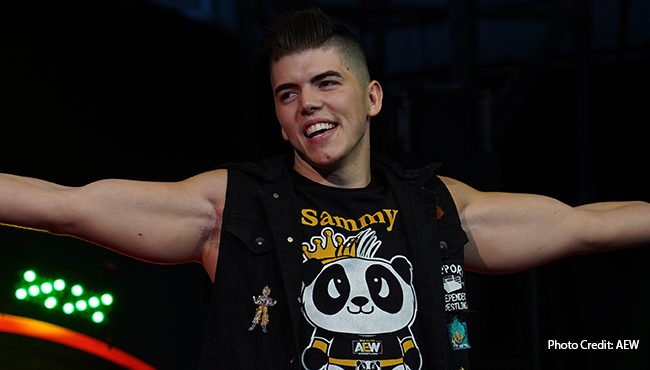 Sammy Guevara recently had an interview with France’s CatchClub where he talked about several topics including the early shows of AEW Dynamite, learning from Chris Jericho, Kurt Angle, Zack Ryder, almost quitting wrestling, and much more.

Sammy Guevara on the first shows of AEW Dynamite:

“That night was super crazy because like you said, I had the first ever AEW Dynamite match. It was very nerve-wracking. Because it’s the first match of this new show so I’m setting the bar for this new company, kind of. And I want to do really well, and I know and I could do well but you know sometimes it’s just in our own head. That night I was so nervous, like you just want to quit. You want to run away. But you can’t run away from yourself or what you feel. You just have to deal with it. Face your fears head on. That’s what I did that night. I thought to myself, ‘Whatever happens, is meant to happen.’”

“And then at the end of the night, joining the Inner Circle in front of 14,000 people at the Capital One arena. I got Chris Jericho, Hager, former LAX guys. These are people I watched on TV, or even tagged with earlier that year concerning Santana and Ortiz. It’s crazy to think that little decisions in our lives all brought us here, to this moment. It’s a night I’ll never forget.”

“It’s been amazing. Chris is super awesome. The Bubbly Bunch was all his idea. Jericho taught me a lot just by observing him. I remember we were on commentary together a few weeks ago, and he’s putting Jon Moxley over, telling how great he is. And he told me about this before but now I’m seeing it live in action. He’s putting over his opponent, not doing the typical, ‘that guy sucks, I’m going to beat him’ thing. No, he’s actually saying his opponent is very good but he’s so great he’ll beat him anyway.”

Sammy Guevara on former WWE wrestlers he would sign to AEW:

“I’d want to pick up Kurt Angle, if he can still wrestle every now and then. We don’t need him to wrestle every week. Just select dates to keep his prestige. He could have some awesome matches not only with myself but with a lot of other guys. I feel like he’s a guy that can teach us a lot.

Zack Ryder, it would be dope to have him. He’s super creative. He was one of the first people on Youtube with the True Long Island Story. He blew up and made something of that before anybody that I know of. What a genius to capitalize on this tool that we all have.”

“I’ve been dropped on my head many times by other people on the indies. I’ve taken some nasty falls for little money. And I remember one time I was dropped really bad on my neck. It was so stiff for several days. And I remember laying in bed at my mom’s house. I barely had any money, I probably had 5 dollars in my bank account, if that. And I remember thinking, ‘Am I going to be able to do this? What if I keep getting dropped on my head?’. This is so dangerous. Wrestling is a show but you can get legitimately injured, you can die. And I feel like I got very close to having a very significant injury there. So I didn’t know if I could do this, but I told myself that I got to do this. And I remember I was crying because I didn’t know what to do. But I told myself whatever it’s going to take, I’m going to do this! And I’m glad I didn’t quit!”