Breaking News
Home / impact/indie / Sami Callihan On Injuring Kevin Sullivan Being a Work, Sullivan Was In On It, Ric Flair Wanted to Bury Him, & More

Sami Callihan On Injuring Kevin Sullivan Being a Work, Sullivan Was In On It, Ric Flair Wanted to Bury Him, & More 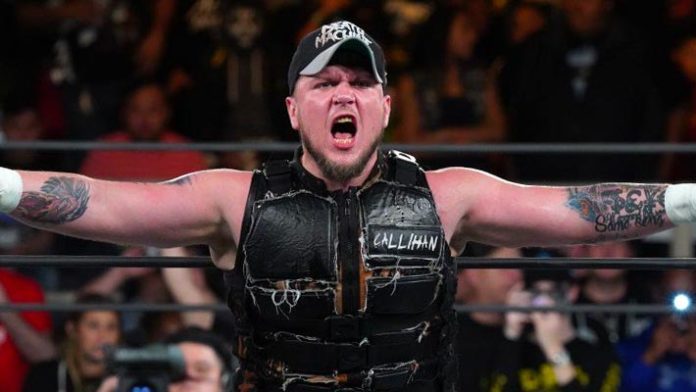 Former Impact Wrestling Heavyweight Champion, Sami Callihan joined Chris Van Vliet on his show to discuss several topics, including an incident with Kevin Sullivan that had a lot of people furious at him.

On April of 2018, Callihan posted a picture (which you can see below) of Kevin Sullivan’s head busted open, after he threw a chair at him during a Rockstar Pro event. This picture drew a lot of controversy for Callihan, as Sullivan claimed during interviews that Callihan hurt him and was unsafe. This was after the infamous Eddie Edwards chair and bat incident on Impact Wrestling, which only added to Callihan’s reputation.

Kevin Sullivan wanted to run his mouth tonight @RockstarProWres… So he got his old ass beat. I don’t care who you are, or what you’ve done. Just add his name to my list of victims. My give a fuck is broken. #TheDRAW #Unsafe pic.twitter.com/f0Q1ZoBXPb

The whole thing ended up being a work as Callihan had photo-shopped the picture to make it seem worse than what it was. Sullivan played along with his promos. Several people were convinced it was a shoot. Several legends, including Ric Flair called Sullivan furious over the incident.

Check out a few of the highlights or watch the full video interview below:

“People still think that I hurt Kevin Sullivan. Which, at the end of the day what people don’t realize is, I’m a master graphic designer. Not to put myself over. I PhotoShopped that entire picture. He had a little nick on his head because he gigged in the match after getting hit with a chair and he had a little egg. And he was like, ‘Oh, take this picture and post it online. And then I PhotoShopped it, and I did the same thing when you’re a child, and you like, try to make girls’ boobs little by putting the inflate thing, or make people’s eyes bigger by hitting the inflate. I did that to his head, and then posted the picture of him half-dead and said, ‘This old man stepped to me.’

Sami Callihan on Kevin Sullivan playing it up and getting Ric Flair furious:

“And then like, he worked into it to because he’s old-school. He went on social media and stuff, and went on interviews and buried me. And said, ‘Oh yeah, when we got to the back, my guys and the oVe guys got into a fight. And the cops were called at the building. He worked it to everyone, to the point that Ric Flair called him. And was like, ‘Yo, we need to bury this dude.’ And Kevin was like, ‘Ric, it’s a work! It’s a work.’ And Kevin said many and many, and many old-timers had hit him up and like, ‘This kid’s dangerous, he hurt Eddie Edwards, he hurt you.’”

Sami Callihan on backlash he gets from wrestling fans:

“People don’t realize, I went my entire career without hurting anybody. And then you hurt one person and you’re public enemy #1. Because everybody wanted me to apologize to them. The fans thought they deserved an apology, like, ‘Oh, you’ve gotta apologize to us. You didn’t keep your opponent safe, that’s wrong.’ And that’s exactly what’s wrong with the business. Why do I gotta apologize to the fans? You’re damned if you do, you’re damned if you don’t. Like, ‘We need wrestlers to quit breaking kayfabe and work their character.’ Well I do that and I go on TMZ, but that makes me public enemy #1 and I’m just a piece of s**t.”

Previous The Rock On If He Misses Wrestling, Thoughts on Success of AEW, More
Next WWE RAW Results & Highlights (4/13)