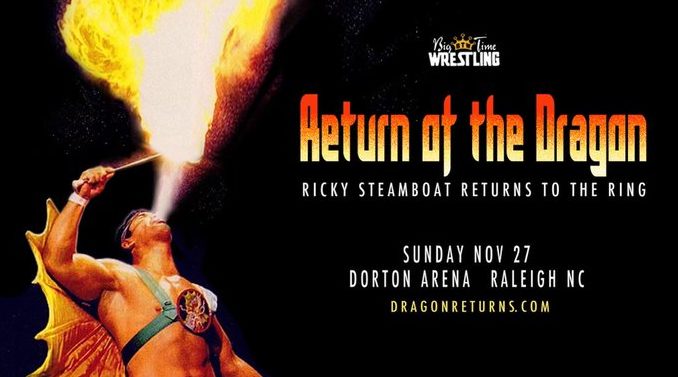 Ricky The Dragon Steamboat recently had an interview with Wrestling Inc where he talked about his return to the wrestling ring this coming Sunday November 27 for the Big Time Wrestling ‘Return of the Dragon’ event in in Raleigh NC. Steamboat will partner up with FTR and will take on Brock Anderson, Jay Lethal, and a mystery partner. Here are some of the highlights:

Steamboat on why he chose to return for this match:

“This took almost four months for me to make a decision. It was very difficult. And before I could give a final, this past month or so, I’ve been… Glenn Jacobs, that name ring any bells? Yeah. And Tom Pritchard, they have a wrestling school outside of Knoxville… So for the past month or so, I’ve been venturing down to that school once or twice a week just to get some back. But I learned more so on my limitations. Like you said, it was 12 years ago the last time I was in the ring. But at that time I was one of the trainers, coaches for WWE. So I was pretty active at the school, getting in the ring with the young guys and being more hands-on. I learned this past month that I’ve acquired new limitations and then some of the things that I thought that I could do well, I capitalized on those when I was practicing.

I kept saying to myself, ‘Ricky, don’t be stupid. Don’t be stupid. Don’t let ego get in the way.’ So [I’m] still able to sprinkle some of that dust, Steamboat dust, and hopefully the fans in Raleigh will enjoy reminiscing, going back. But you asked why. I was thinking that the longer I wait, the less chance I will have. I’ll be 70 in February and Mother Nature does creep up on you and the older you get, it creeps up on you faster. And Raleigh’s Dorton Arena holds a special place in my heart. I’ve been around the world, wrestled in Japan, the Madison Square Gardens, Philadelphia Spectrums, and the list of places that I’ve wrestled and headlined goes on and on, but good old Raleigh, North Carolina, Dorton Arena. And I’ve got a specific reason: I stepped into the ring with the world champion for the first time and it was Harley Race. And he was old school, tough guy. He was an old-timer tough, brought up in the ’60s, this guy. And so that was the first time I ever stepped in the ring with the world champion. And then the second reason: back in the day, the main events had 60 minute time limits. And it was the very first time I wrestled anybody to a 60-minute time limit, to a draw. And I did it with the world champ. So Raleigh holds a very dear and close wrestling memory out of all the places that I’ve been. You could go with me and Savage at the Silverdome in Pontiac, Michigan, at WrestleMania III. But that match, it wasn’t filmed, it wasn’t televised, it was just what you call a regular house show match. But what a night it was for me to be in the ring with the champion and then go 60 minutes and hold my own with him. So for that very reason, and a big thanks to all the fans in Raleigh that have come out over the years to support Mid-Atlantic. Jim Crockett was the promoter and I was there from ’77 to ’85. So eight years of being in one territory back in the day was a pretty good stretch.”

Steamboat on if he thinks he might wrestle a big match for WWE or AEW:

“I really don’t think, I don’t think so. Going down to Pritchard’s ring, understanding my limitations and just going to give it one more shot. I don’t have the type of ego to where I need to go out there, whether it’s to enjoy it or whether to prove something that I can still do it. I don’t have that mindset. I’m looking at this really as a big thank you to all the fans in Raleigh. That’s basically, and the reasons that I gave. Being in the ring for the first time and the support. Being in the ring the first time with the world champion, the support they gave me through the eight years that I campaigned throughout the Carolinas. And that’s the reason, I’m passing off a big thank you card to the wrestling fans. That’s what come to my mind.”

Steamboat on teaming up with FTR:

“Well, let me tell you this. Like I said, this, for me to make a final, final decision was three or four months in the making. I just didn’t jump on it the first time I was approached from Big Time Wrestling and I have an agent guy, Tony Hunter, who also works with Big Time Wrestling, and when I was first approached, but FTR, when I was first approached were heels. They were going to be two guys on the other side of the ring that I was going to be wrestling. And AEW turned them baby faces, turned them good guy. So they said, ‘We can’t have heels working against you, Ricky, you’re a baby face. So what would you think if we had them as your partners?’ And I thought it was great too because they were at the school WWE, back in the day when I was a trainer and I’d work with them in the ring and I know they’re good hands and I’m glad how they’ve grown in the business with AEW. And so the adversaries, the Jay Lethal and then Old Arn Anderson’s boy, Brock and they still got a mystery partner and I haven’t been privy to the mystery partner. Can you believe this? It’s coming up this week.”

Steamboat on the current direction of WWE:

“To be honest, I had not watched a whole lot. But what I have watched, and also what I’ve heard, is I like the fact that you have to bring wrestling to 2022, but they have not relinquished, I believe the foundation of the business and some of the old school stuff. The business was founded and carried for so many years on the ideology of the way I worked and Flair worked and all that. And I still see it being sprinkled among the young kids out there now. So I feel good about it, as long as they continue to do that, the psychology of the business, and keep bringing it back. I mean, it worked for so many years and if it’s not broke, don’t fix it, right?”