Ric Flair: To Be the Man…Whoooooo! 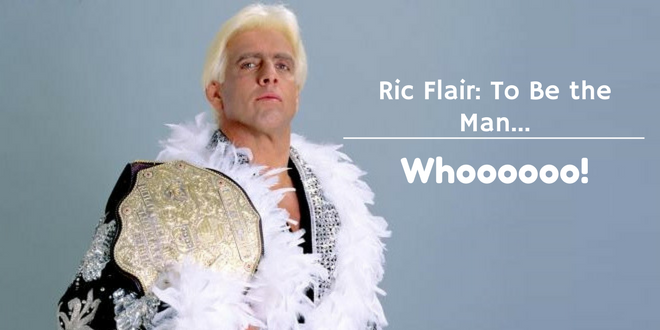 Who’s the greatest of all time? In the NBA and NHL, there isn’t much of a debate, it’s Michael Jordan and Wayne Gretzky. In other sports however, the answer isn’t always so easy. Pro wrestling falls into the latter category. There technically is no right or wrong answer. The top spot in the business has seen all types of different characters over the years. There’s been supremely popular babyfaces, conniving heels, unforgettable underdogs, but there’s only been one “Rolex wearing, diamond ring wearing, kiss stealing, whooo! Wheelin’ dealin’, limousine riding, jet flying son of a gun,” the “Nature Boy” Ric Flair. Flair is as close as it gets to a wrestling God. He’s a record 16 time World Heavyweight Champion, reaching the top of the mountain in both the WWF and the NWA/WCW. More impressively, he’s the only two time Hall of Fame inductee in WWE history, having been inducted both as a singles wrestler and as a member of The Four Horsemen. It’s one thing to be considered the greatest of all time by fans and broadcasters. It’s something completely different to be widely regarded as the greatest of all time by your peers. Shawn Michaels, Triple H, and AJ Styles, to name a few, have all said they consider Ric Flair the greatest wrestler ever, and it’s really hard to argue with them. Flair dominated the 80’s just as much as Hulk Hogan did, and he did it as a heel. While Hulkamania ran wild in the WWF and helped propel them to the national spotlight, Flair “styled and profiled” all over the globe as the NWA World Heavyweight Champion. His 80’s run alone made him a legend, but when he was able to adapt and remain relevant through both the 90’s and 2000’s, all the way up to his final WrestleMania XXIV classic with Shawn Michaels, it became abundantly clear that Flair truly was the greatest of all time.