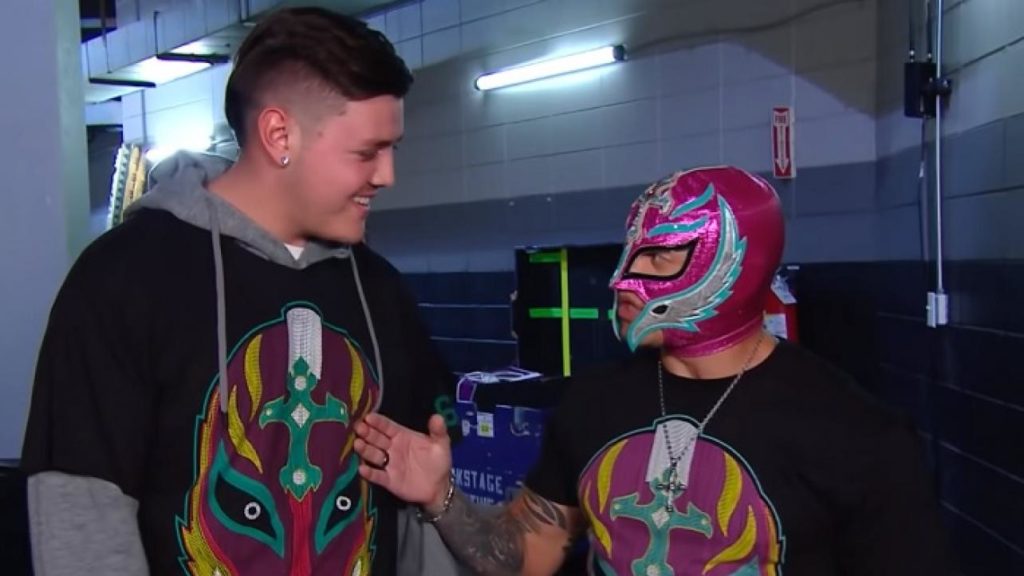 Rey Mysterio recently spoke with GalaxyCon’s Rock Around the Ring where he discussed his son Dominick’s progress in the ring. He mentions that Dominick has been training for a while now as we’ve seen him taking part in Rey’s feud with WWE Superstar Seth Rollins. Rey gives his thoughts on how far along Dominick is in his training as well as who would be a perfect opponent for him.

Rey Mysterio on where in his training Dominick is currently:

“At first, right off off the bat I did [see] that he did have something special. Because he was picking up everything as it came along, you know. He wasn’t falling behind, you would explain something to him once, twice, and he would jump right on it and continue, and get ready for whatever else he was learning. But overall, I see him, and — he’s a very special case. I truly believe wrestling is in his DNA. That’s what he was meant to do, even though he started very late at training at the age 19. For the past three years, he’s been kicking ass and I’m so proud of him.

“But overall right now, he’s — he did a session with Lance [Storm] up in Canada. And then he was with Jay Lethal in Tampa, and right now he’s training with people here in San Diego. And the school he’s at now is incredible. I actually love going there myself, because I love working with people. He’s so fresh with everything he does and is so creative.”

Rey Mysterio on if Dominick would be interested in training Mexico or Japan:

“I think he’s open-minded, and he’s willing to do whatever it takes for him to get to the next level. And of course, he can only train so much. But in order to really pick up what he needs to know, that is going to happen in his first matches. So that is probably the next phase that we’re looking at soon, hopefully … I truly think that he should be ready by early next year.”

Rey Mysterio on if he would want Dominick to be his final opponent:

“That’s something that I don’t — I would hate. I would hate to walk out and have my son take over on my last match. I think the torch has already been passed, and will eventually again the day that we get to share a ring together and perform in front of fans. That’s when the torch will be passed onto him.”

Rey Mysterio on who he thinks would be a good opponent for Dominick:

“I think without a doubt, just because of the style he brings, Andrade would be awesome. Andrade or [Angel] Garza, I think they would be incredible against my son. But overall, I think Cesaro would do incredible as well, just because of his height. Dominik is 6’2″, 195 pounds. Still to this day I tell my wife I’d love to DNA him because I believe he’s not my son [laughs].”

Previous PCO On His Run in WWF/WWE, Jacques Rougeau’s Falling Out With Vince McMahon
Next Kurt Angle on Why the Boneyard Match Is His Favorite Cinematic Style WWE Match