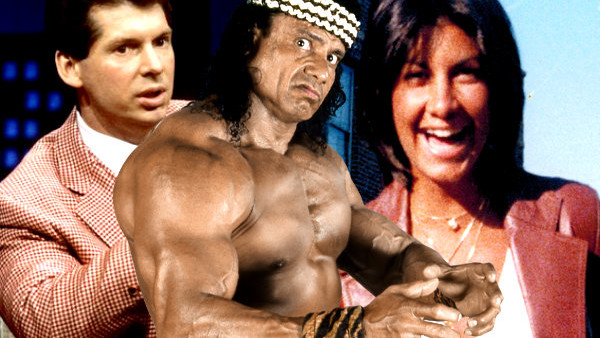 A new report by Mel Magazine has revealed a police report that was filed against Jimmy Snuka for the assault of Nancy Argentino in 1983. In the police report it states that Vince McMahon tried to convince Aregentino from filing a complaint on Snuka.

At the time, Jimmy Snuka was arrested for misdemeanor assault in the third degree, felony assault count in the second degree and misdemeanor counts of resisting arrest and obstructing government administration. Argentino died four months later of a skull fracture. Police investigated Snuka, but he was never arrested until 2015. In 2017 all charges were dismissed after he was deemed unfit to stand trial.

According to the story from Mel, the note about Vince McMahon was found in a file for the investigation of Argentino’s murder by Pennsylvania’s Whitehall Township Bureau of Police. Pennsylvania Detective Gerald Procanyn talked to Sergeant Peter Bronstad, and Deputy Alex Romanenko, who were all there when Snuka was arrested. On his notes, Procan wrote,

“Vince McMahon tried to talk her out of making the complaint against Snuka.”

Sergeant Peter Bronstad doesn’t remember hearing anything about McMahon, but does remember a ‘shorter, older man wearing a hat’ who claimed to be his manager and tried to post bail, because Snuka had to wrestle the next night. According to the report, at least two officers saw Snuka go back and attack Argentino, after being arrested for assault on January 18, 1983.

Cynthia Porter, who was an officer in training at the time said she heard Argentino cry “No, no, don’t do that!” while she was outside the room waiting for Bronstad, her backup to show up.

“I moved to the other side of the doorway and saw a woman on the bed against the north wall of the room lying down crying and huddled in a fetal position. At this point, [Snuka] attempted to close the door[,] but I started to talk to him about letting us in or her out. At that point, he opened the door further and walked towards the rear of the room, and the female got up wrapped in a bed sheet. She moved away as he strode toward her. At this point, he began to yell that if she wants to leave[,] go ahead. So I told her to come on out and she ran past him. As she did, I moved in front of the doorway and the male ran towards me and struck me in the chest area with his left forearm and pushed me against the wall. Recovering from that[,] I observed that the male had grabbed the female by her hair and was dragging her face along the wall (north) of the building. I got one handcuff on the hand he had the female by the hair with[,] which was his right hand[,] and after several seconds of struggling with him[,] he released his grasp on the female.”

Bronstad also said that Argentino “complained of neck, head, back and hand injuries.” Deputy Lawrence Witter said Argentino had “a bruised right thumb, contusion to the neck, possible fractured ribs and injury to the lower back.”

This season, VICE’s Dark Side of the Ring covered the Snuka story extensively. There has always been speculation by many about McMahon being involved in some sort of cover-up surrounding Argentino’s death. Showing up with a briefcase for a meeting with assistant attorney Robert Steinberg, detectives and the medical examiner only added to the speculation. Nobody knows what was in the briefcase or what it was used for.

Here is a statement from Snuka’s 2013 memoir, which was ghost-written:

“Shortly after Nancy’s death, I was questioned by police and let go. At one point, I went with Vince McMahon Jr. to either a court or law office, I don’t remember which because I was still in shock. All I remember is he had a briefcase with him. I don’t know what happened. I think Vince Jr. picked me up from the hotel and took me there. He didn’t say anything to me. I don’t know if he gave Nancy’s family money or anything.”

This is the first time Vince McMahon’s involvement in the 1983 assault case was revealed to the public. You can read the file below.

Previous Roman Reigns Says His WWE Absence Is Not Because Of Health Concerns, But Because of His Newborn Twins
Next Jon Moxley On AEW’s Locker Room Atmosphere