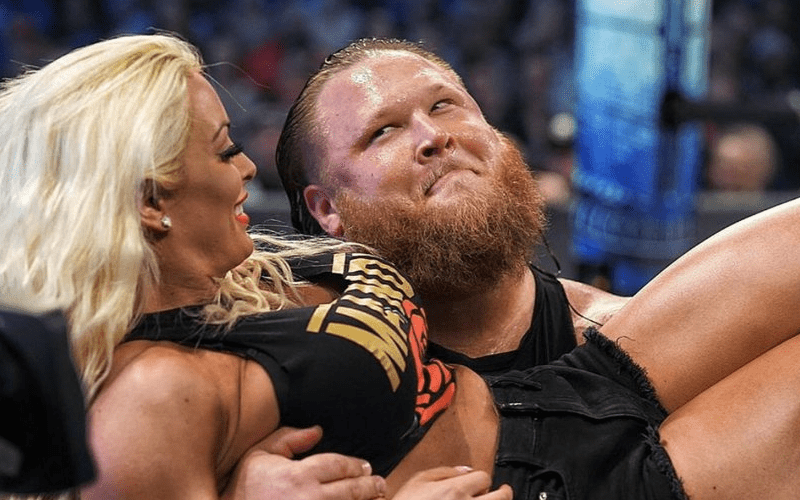 WWE Superstar Otis recently spoke with Between the Ropes to talk about several topics including his big win at Money in the Bank, Paul Heyman, cinematic matches, crowd-less matches, and much more.

Otis on Paul Heyman after being hit with sandwiches at Money in the Bank:

“He still has a bit of rye bread in his eyelid, for sure. There’s nothing I love more than having a massive plate and shoving into Paul because he started this whole thing in that match. You put a massive, very very full mayonnaise sandwich in my face and I think Paul loves mayonnaise. So yeah, I must have lost my temper a little bit. That’s how he got the whole load in his face, brother.”

Otis on winning Money in the Bank:

“Oh, man, it’s like, as a lot of people said in the interviews that the risk is worth the award. It’s a big risk in this kind of match. You’ve got me and five other studs in this match, you’ve got veterans and anything can happen, man. So, as WWE says, you never know what’s gonna happen ’til it happens. I was even shocked as I caught it. It was like NFL possession. “I got it, baby! I got the touchdown! Yes. First down. So, it’s like very, like, surreal and still hasn’t sit in with me still yet. that up because a lot of people in this profession, it’s like, we’re on the go so it doesn’t sit in until like you start going, wow, this is real. I got this bad boy. All right. In the game plan for me, it’s just like my personality – the sooner the better, baby so you never know where I’m going to cash it in but baby, I promise it’s gonna be sooner than later baby. Yeah.”

Otis on what didn’t happen at Money in the Bank:

“Let me see… There was not really much. There’s probably a few things like do you run through this wall? Do we break this mirror? The little stuff like that but I mean we’re super happy with it. I’ve been to the headquarters before but I never went to the whole building. They have so many buildings over there but that building itself is massive. My instinct in my strategy for the match was just keep finding an exit door because I know being the big sexy, hairy man that I am, I don’t think speed is going to be the strategy. I think speed is going to go with AJ, then Aleister Black. They’re gonna have the speed there but my favorite is probably the weight room because (laughs), like dropping the heavy bar of 425 pounds on AJ’s chest. That’s personally my favorite along with the pie to the face of Johnny Ace, John Laurinaitis. There was probably more planning for the food fight because there was so much wet food. And it was nothing but fun, man. But yeah, I like what we created with the weight room because it’s like, this is legit weights and machines so you can’t just pick something up and just chuck it at a brother. It was definitely interesting, man with Corbin and the big swing of that plate at Daniel, that 45-pound plate with the mirror. That sounded so loud and it was intense.”

Otis on expecting cinematic matches to continue to happen:

“Yeah. I think everything happens for a reason. That’s a very strong quote that I live by. That Boneyard match, I mean, I just felt like I was watching a cool thriller action movie, like big thumbs up to everybody that worked on that. The Firefly match, our Money the Bank match. So if this pandemic which is unfortunate, super sad, we’re losing lives and we’ve got to be careful if you go out in public and you have to wear those masks you can barely breathe in. We’ve got to be careful but if that didn’t happen, would these ideas spark with our creative team, our writers and producers? If this pandemic didn’t, unfortunately, pan out, I don’t know if you would have thought of that Boneyard match or thought of that awesome Firefly Funhouse match. I think we could definitely be in the norm here though. Yes, we’ll have our matches in front of the crowd but I think that, for sure, we’ll continue these awesome idea matches that are not exactly with the people but just some to keep the fans going and interested. so yeah, It’s really cool and again, I can’t tell how awesome the guys with the cameras are and they catch some good stuff, man. Like, he’s just like, ‘whoa, there’s my belly. There’s my face. Oh, yeah.’”

Otis on what he’s learned during these crowd-less show:

“I look at the camera longer. There’s a saying, you know, that the camera is gonna find you but I’ve never really worked really hard to be on the camera. I’ve always been looking at the fans. I look over there to the left, I look to the right. They’re giving me the energy and I love that. That stuff’s like jazz to me, man. Like, to do something and get a great reaction off of it, it’s priceless. You can’t put a price on it. It’s a great feeling but now, what I’ve learned is like keep your focus on the camera and just make sure that what you’re selling to the people is something where, you know, they’re gonna feel that across that camera. An audience, they could feel it because like I said, nothing’s better live. I mean, hockey is cool to watch on TV but I love watching it live, man. I love that stuff like football games. Same thing with people live you feel it naturally but to feel to the screen is the hardest part and that’s something where I’m always going to be learning. It’s definitely something new for me but every day you learn something new and this has been awesome, man. As much as we miss the fans, these are reps we can do with talking to people through the camera and making sure they’re entertained at home.”

Otis on not having a crowd during his WrestleMania moment with Mandy Rose:

“Oh, oh, oh. That is the only thing I’m sad about, brother. This story just reminds me when the drama is happening, people are circling everybody, you know, and they’re like, Oh, yeah, you know, they’re picking, picking their favorites. That definitely, I hear from my co-workers that are veterans, they’ll be like you never forget your first WrestleMania experience with the crowd. That first time, it’s something that it’s crazy and I was very excited of course. That vision is still in my head of hopefully someday. In life, there’s only one guarantee and that’s there are no guarantees and that’s life. So you gotta basically take what you can when you get the opportunities. But yeah, it was great to have the reactions on my phone when it happened because a lot of people are like “oh, yeah, kiss Mandy, she’s like a beautiful peach”. I think it was trending number one on Twitter at the time when we connected lips. But yeah, it’s somewhere. I was like, dang, man, this is awesome but that crowd. I mean, oh. The vision of this, imagine the closer and closer I got to Mandy and picked her up to my arms. Then we get that look like do you guys think we’re going to do it? Oh yeah and then connect the lips, you know, tasty lips of Mandy’s.

“Man, the crowd absolutely would have been crazy. The crowd at the Royal Rumble, when she was getting eliminated and I was on the ground sneaking around the ring and she landed on me and she wasn’t eliminated. That was a nuts reaction itself, man. If you watch it back when Mandy falls out of the ring and she lands on my 335-pound sexy body you know what I mean? It was like the first three rows noticed it and then the whole arena noticed it in that baseball stadium. It was nuts, man. I could have imagined WrestleMania but we’re with these times during a pandemic and you have to keep it safe but as long you can still see it through the camera, baby.”

Otis on expecting to take a more serious aspect to his character:

“Oh yeah, man. I don’t really qualify myself as a comedy wrestler but it just kind of comes natural to me in the way I use my body, the swagger about myself. It comes out very funny and very loving but at the same time, it’s like I could turn it … we call it the switch in amateur wrestling. You see your opponent listening to music you wrestling them. You know he’s not for real because when you turn that switch on, it’s time to go, to battle and get that win and to me, it’s the same thing. If you want to see a serious Otis, you’re getting him, man. It’s easy to go back and forth in my eyes to, OK, we’re having fun but when it’s time to go, it’s time to go. That’s what we preach a lot with Heavy Machinery. We’re those fun guys that barbecue but if someone’s acting up, they’re gonna get theirs. (laughs)”