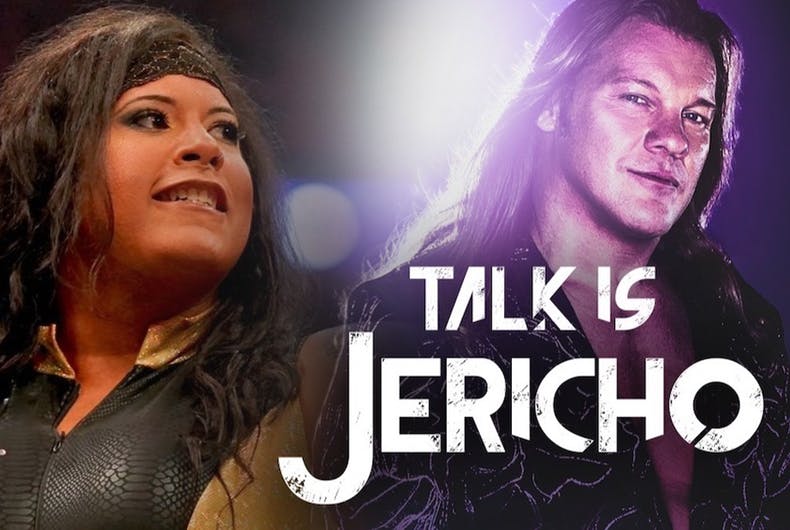 AEW Women’s Champion Nyla Rose was the latest guest on Chris Jericho’s podcast ‘Talk Is Jericho,’ and responded to some criticism that she has received.

During the conversation Jericho started talking about his close friend Chris Kanyon and his passing. Jericho said that everyone knew about Kanyon being gay, but nobody thought any less of him.

“There’s a guy – God bless him – his name is Chris Kanyon, a wrestler,” and we always kind of knew that he was gay, but no one cared! He never came out. And then, he ended up taking his own life because of it and it’s just one of those things. Like, we knew! We were all a gang with Disco Inferno, and Billy Kidman, and it’s like we never saw him with any chicks. You know, but why be scared around your friends? And that ended up leading to him wanting to take his life.”

Nyla Rose talked about having to develop a thick skin through empathy and compassion in the industry as a transgender woman.

“It’s just kind of like I’ve been through so much, I’ve dealt with so much, and it’s kind of like, I’m here. I’m doing this. I’m here for me. I can’t worry about other people and what they’re hung up on. If they’re sour about something in their life and using me as a punching bag, which is what it is a lot of times, I get that. It sucks. Please stop doing that. But I get it, but I can’t be hung up on that. You have to [have thick skin]. You absolutely have to. And I think a lot of that comes from empathy and compassion. Again, just kind of realizing that while I have been dealing with this for as many years as I’ve been alive, it is completely new for a lot of people, so they’re kind of being thrust into the front and given all these things. It’s very confusing and when people get confused, they get afraid, and when they get afraid, they don’t like to get afraid, so they kind of lash out. They want to understand, but they can’t understand, so they push back a little bit, so I just try to be compassionate of those people and just talk to me.”

Rose mentioned that her pro wrestling training began as a man. She also mentioned that the very first time she presented herself as a woman was when she took out the trash.

“I was there [at pro wrestling school] male presenting. I was there in boy mode, as they say. Yeah, because [male presenting] is what it was. I was playing a part, the biggest part I’ve ever had to play in my life. I was playing that part, and I was trying to get over, and convince everybody of something that wasn’t true. But in my own time outside of when I was training for [pro] wrestling, I was Nyla Rose in my bedroom and in my own life. The first time I went out fully dressed [female presenting], I was taking the trash out.” Rose continued, “it was such an accomplishment to walk the eight feet to take the trash out! But yeah, I was male presenting at [pro] wrestling school. They were just very confused about me. They thought I was just very flamboyant. Here I am, I would come in singing show tunes or just having feminine qualities, but looking like this macho playboy type.”

“It’s really funny because when I reached that point of, ‘I have to do this – I have to make the change,’ I wasn’t sure if there was a place for me in pro wrestling,” Rose recalled. “But pro wrestling was one of the first places to absolutely embrace me and take me in.”

Rose feels that some of her critics are hypocrites because some of them enjoy intergender wrestling with females competing together with men.

“I think there’s a lot of misconceptions and a lot of people conflate their feelings with actual facts, especially, especially with us being in [pro] wrestling because you look online, anytime I do anything, like if I tweet I woke up in the morning [and] it’s going to be a negative thread, right? Anytime I do anything, people have everything in the world to say about it, but they don’t keep that same energy for straight up intergender wrestling, right? I never see the hate. It’s always like, ‘beat her ass!’ Like, wait a minute, wait a minute, hold up. Where’s the same energy? Y’all are protesting me, but here’s a man, wrestling as a man wrestling a woman, and y’all are absolutely okay with that. The women in the company don’t have a problem with me. Why do you?”

According to Rose some people don’t want to face facts, because they are blinded by their own rage.

“These people are so wrapped up in their rage they don’t even pay attention to the facts.” This fake rage that a lot of people [have], they don’t even want to hear the facts or learn the science. They’re just comfortable in their little bubble and then they want to ride that out. Like, that’s the weirdest thing for me. I love knowledge! Like, you tell me something and I want to learn everything about it, even if I don’t agree with it, I want to know about it.”

You can listen to the whole podcast below