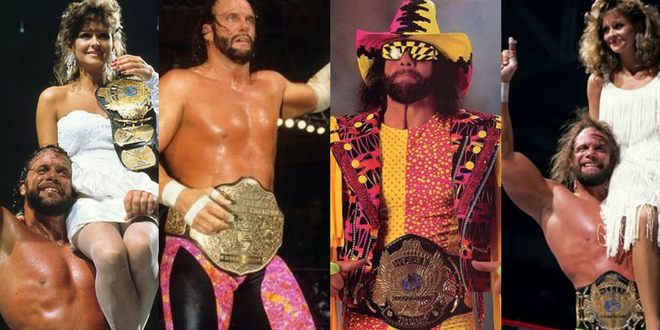 Every once in a generation, an athlete comes along that completely transcends and changes their sport. There was Ervin “Magic” Johnson, who along with his “Showtime” Lakers, provided a layer of flash and entertainment that was crucial in shaping the modern NBA. We also had Peyton Manning, who’s innovative style of running a “no huddle” offense and calling plays at the line of scrimmage became the norm among NFL Quarterbacks. Then there’s “Macho Man” Randy Savage, the man who changed wrestling, both in and out of the ring. Before Randy Savage, professional wrestling, especially the WWF, was truly the land of giants. In an era where “Superstar” Billy Graham, Jesse “The Body” Ventura, and Hulk Hogan were admired for their size, Randy Savage reached the same level of success, substituting huge stature with near flawless ring and character work. “Macho Man” became one of the most iconic characters to ever exist in the world of pro wrestling, and it was due to Savage’s relentless drive and commitment to being the best. He’s a former World Champion in both WWF and WCW, reaching the top of the mountain a combined 6 times. He’s also a former King of the Ring Tournament winner, and perhaps the most iconic Intercontinental Champion ever. His reach went further than the world of professional wrestling. Savage was very generous with his time, and would make appearances at children’s charities way before Vince McMahon made it part of his wrestlers’ duties. He was forever immortalized in the 90’s when he became the official spokesman for Slim Jim. Their “Snap into a Slim Jim, Oooooh Yeahhh!” slogan remains one of the most memorable in pop culture history, and after bringing Savage aboard as a spokesman, Slim Jim would double their sales. The Macho Man was the total package when it came to being a professional wrestler. Not only could he cut some of the best promos in the business, but he could step in the ring and back up ever single word he spoke too. He opened the doors for guys like Bret Hart and Shawn Michaels to be World Champions. His success made it possible for Vince McMahon to look at a wrestler who wasn’t 6’5 275 pounds, and still see a star. Talents like Randy Savage only come along once in a generation, but unfortunately sometimes, like in Savage’s case, it’s a bit ahead of their time.