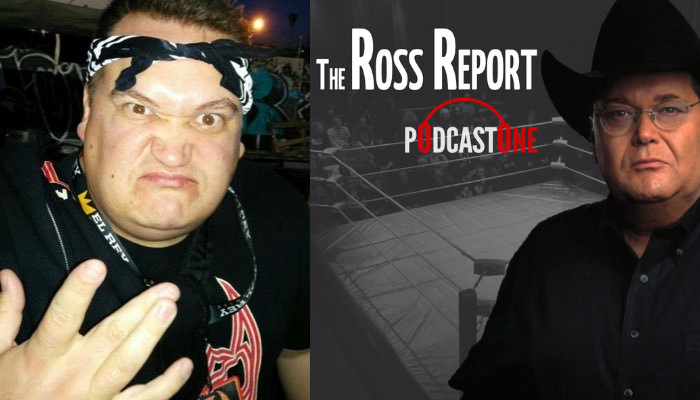 On the latest episode of “The Ross Report” Jim Ross interviews Chris DeJoseph who is the Executive Producer and head writer for Lucha Underground. DeJoseph first got his start in the wrestling industry working on the WWE creative team back in 2004 until 2010, and even appeared on WWE tv as Big Dick Johnson.

Ross tells DeJoseph that he received countless questions from his listeners for him. Everything from Lucha Underground touring to his time back in WWE as Big Dick Johnson. Here is a short recap of the interview, but you can listen to the whole interview at the bottom of the page.

DeJoseph on if  Lucha Underground is a wrestling show or a show where wrestling is performed?

“I guess you could say it’s a show about a wrestling promotion—and there’s wrestling on it. I guess that’s how I would consider it first, but above all, it’s a show. It’s a unique show. It’s a different take on professional wrestling.”

DeJoseph on what is the thought process behind some of the backstage segments?

“When we first began, one of the ideas was to do multi-camera shoots for the backstage scenes. And we tried them a bunch of different ways. And in the meantime, we were doing a vignette—what we call a ‘roll-in package’—introducing the character of Prince Puma. That was shot by one of our executive producers, and he has tons of experience in the business, and we loved the look. So we decided to go back and shoot our vignettes like that and it’s definitely made the show seem different and gave that cinematic look to the entire series.”

DeJoseph on the rumors of a potential Lucha Underground Movie?

“There have been plenty of talks regarding a Lucha Underground Movie. That’s something that—in the beginning stages of creating this universe—was a long term goal. I think it’s definitely a possibility. Do I know when it’s going to happen? I don’t. But I think that would be pretty cool.”

DeJoseph on if there are any plans to take Lucha Underground on the road?

“There are plans to take Lucha Underground on the road, hopefully. We kind of took a little test-run—at South-by-Southwest this year—and it was a great success for us. I think that’s definitely in the plans for the future to definitely do that. I think it will help the show and allow more people to see the amazing action and athletes that are part of their show?”

DeJoseph on how far they are from being offered on Hulu or Netflix.

“Personally, I think it would be a huge thing getting on one of those streaming services. It would bring us—not only into more households, but—into the future, because that’s how people are watching television now. No question that that would be awesome, and I know that’s something they’re working on. But there are deals, there are contracts, there’s money—all sorts of things that need to be handled that fall out of my realm that I have no influence over. I just keep my fingers crossed and hopefully it does reach those platforms sooner or later.”

DeJoseph on who came up with the Big Dick Johnson concept character.

“No. It was not mine. Brian [Gewirtz] made a joke during a production meeting and then it just grew like wildfire. When it was first pitched, Vince as fine with it. He liked it—I think. He was doing it to have fun and to make fun of me. It stuck for a little while—probably too long.”

Remember you can watch Lucha Underground every Wednesday on El Rey Network.

Previous How To PowerBomb Your Wife by Dave Bautista (Video)
Next Neville Returning Soon?

For the better part of four and a half years, Ivelisse has been with Lucha …