It was announced during last night’s episode of SmackDown LIVE from Madison Square Garden in New York City that The Finals Of The 2019 King Of The Ring Tournament will no longer take place at this coming Sunday’s WWE Clash Of Champions PPV Event as it will now take place at this coming Monday’s episode of RAW, which is The WWE Clash Of Champions Fallout Show.

As seen during last night’s episode of SmackDown LIVE, The Finals Of The 2019 King Of The Ring Tournament will feature Baron Corbin going one-on-one with Chad Gable. Gable advanced to the finals by defeating Shane McMahon in a 2-Out-Of-3 Falls Match that saw Kevin Owens as The Special Guest Referee. The match was supposed to feature Elias, but he was replaced by Shane McMahon as Elias was pulled from the match due to an ankle injury. 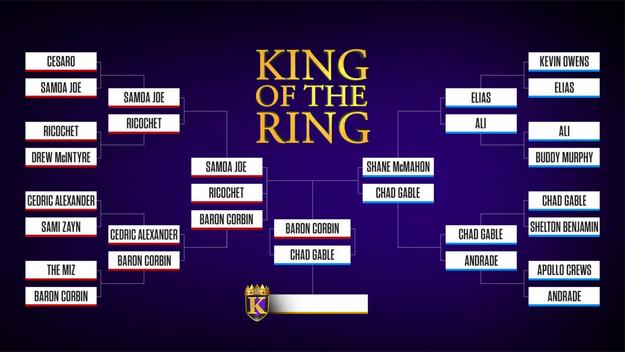 Previous No DQ Stipulation Added To Roman Reigns vs. Erick Rowan At Clash Of Champions
Next Kurt Angle Reportedly Working As A Producer For Monday Night RAW