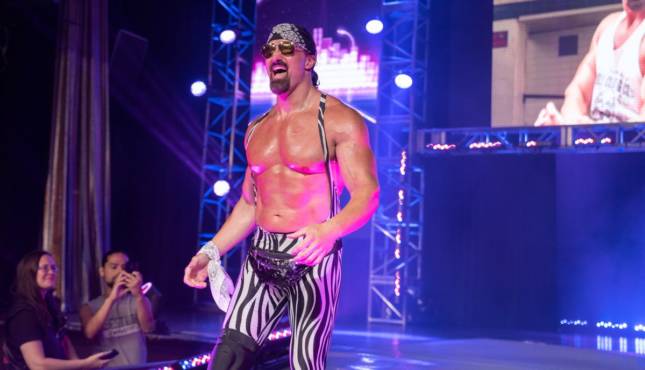 In a recent interview with Fightful, Johnny Swinger talked about several different topics, including how much work goes into a wrestling show, backstage vignettes, the independent scene, signing with Impact Wrestling and much more.

Johnny Swinger on how much work goes into a wrestling show:

“People would never know until they’re actually here before the show starts to see what all goes into this. I’ve been involved in professional wrestling since I was 12 years old and I can’t imagine having to organize all this stuff. I come here, and I get ready for my match, I can’t imagine… How do you keep track of 85 people going all different ways? “Okay, we need this at two o’clock, you got this at four, we’re shooting—” It’s just like a movie production set. I don’t know how those guys do it. Then, even my business, I don’t know how they get it all together and the show comes off without a hitch every time. In the six months that I’ve been back, I’ve never seen a major hiccup or like, “Oh, we were supposed to work that out earlier.” It’s just smooth, man. They’ve got a bunch of pros working together.

“I think they call them cutaways. You know, they’re filming something and they know where it’s going to end up, but if something goes a little haywire, they know how to switch to something else that’s relevant and nobody knows. I think they probably got that from the movie making film industry, but it works. I see that a lot in wrestling now. I can see where there’s always going to be human mistakes, so that’s a good way that I don’t think is expensive or time consuming, that just makes the show smooth. Because somethings always going to go wrong. Nothings ever come off perfect. But, I think the cutaways and like I said, they’ve got experienced people in charge of that and they know when to do it. If something live is dying the production people know it. So, they can make an adjustment and it’s like seamless. The fans don’t know. Only we know. So it’s pretty cool.”

Johnny Swinger on the independent scene:

“I’ve dabbled in that at the independent level. I definitely would see that for my future as far as some day when I’m finished in the ring. Because eventually everyone’s time in the ring is over with. I enjoy working the business; I would like to continue to do that. I would like to learn, that’s something to learn. That’s a new aspect of something that I’ve been doing for almost 30 years is learning, basically, a new craft, a new trade associated with what I already do. So, I already have a leg up on that. Yeah, I’d like to keep being involved in the wrestling business. That’s definitely the next natural step.”

“I think, maybe, I had a premonition. Just from doing something for so long you can kind of sense things. I didn’t sense WWE calling me in the sense that I’m not kinda in that loop any more, I don’t know who’s in charge of that, who’s running it. There’s all new people there. I know Cody [Rhodes] from when he was 15 years old. That’s the last time I saw him. Maybe one other time since then. So, he’s not somebody that I would expect to get a call from. But, knowing Scott [D’Amore] and Don Callis—he was the booker in Winnipeg when I had my first match ever. So, he’s another person that I have a super long history with who is familiar with my talent and how to use it. So, I guess I thought, if someone asked me, “Hey, where would you go, IMPACT!, AEW or WWE?” Just IMPACT! would make the most sense and then words become flesh, so to speak.”

Previous Barry Darsow On Why Demolition Is Not In The WWE Hall of Fame, The Road Warriors, & Much More
Next AEW Double or Nothing Post-Game Show (Video)