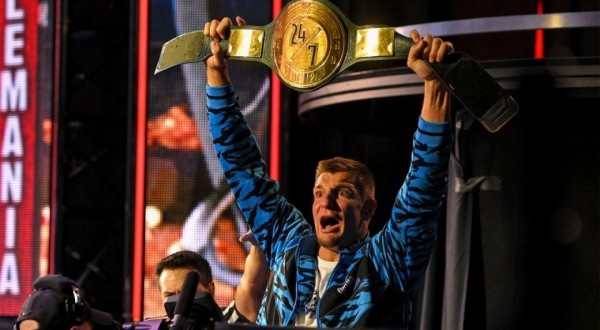 Defensive end for the Houston Texans, JJ Watt recently joined The Bump for a short interview.

During the interview he talked about being a big fan of Hulk Hogan when he was a kid, then becoming a fan of The Rock and Stone Cold as he grew up. He also discussed the possibility of Rob Gronkowski having to defend his WWE 24/7 championship during an NFL game.

JJ Watt on his favorite wrestlers:

“Yeah, you know. I mean, I had the whole Hulk Hogan get-up when I was a kid. Obviously, I grew up [watching] The Rock and Stone Cold, everybody.”

“Here with the Houston Texans actually, a couple years back we had a guy named Sean Hayes, who is now a strength coach with WWE. And he does impressions and all those, and he’s incredible at it. So I’ve actually had a lot of fun with him over the years, and we’ve pranked some of my friends because he does such a good Stone Cold impression.”

JJ Watt on Rob Gronkowski playing in the NFL as WWE 24/7 Champion:

“Yeah, I’m interested to see how it plays out. I mean, I would love nothing more than to see how that Championship gets played out in the middle of a game just to see what kind of fine the League would come up with in that situation. But I think it would be wildly entertaining.”