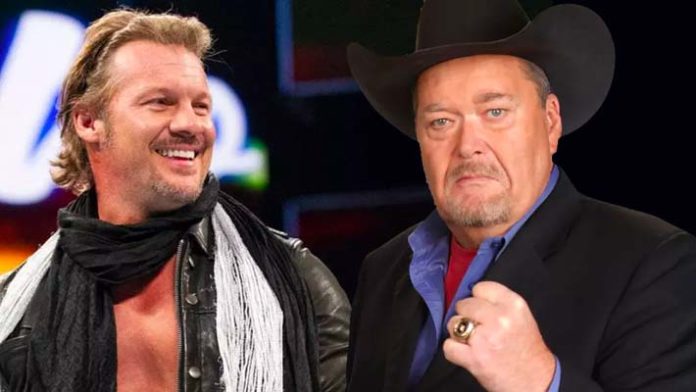 WWE Hall of Famer Jim Ross recently joined Chris Jericho on his Talk is Jericho podcast to talk about several topics including his new book “Under The Black Hat.” Ross also talks about pitching Chris Jericho to Vince McMahon, trying to surprise McMahon, incident between Jericho and Goldberg, plus much more.

“I wanted to give him a pleasant surprise when he found out you’re taller” Ross would reveal. “I knew how tall you where of course. And I had studied your matches. Japanese matches, Mexican matches. I studied you and I knew that you would fit [in WWF]. Your age was perfect, you know? And another thing about you Chris? Your durability was astounding.  You always wrestled physically. And that’s what I told Vince, ‘he’s a tough little bastard.’”

Jim Ross on incident between Chris Jericho and Goldberg:

“And then of course, when you face front facelocked Goldberg back in the locker room? That I witnessed. He [Vince] looked at as a source of pride. ‘My 5’10 star, he stood up for himself!’ Then I would say to Vince ‘there you don’t have to worry about Chris, he won’t be pushed around.”

Previous Stephanie McMahon & Triple H Were ‘Goofy Around Each Other’ During ‘Awkward’ First Steps Of Their Relationship
Next Eric Bischoff On James Storm, Didn’t Like Putting Other Talent Over, Backstage Story Between Storm & Scott Steiner