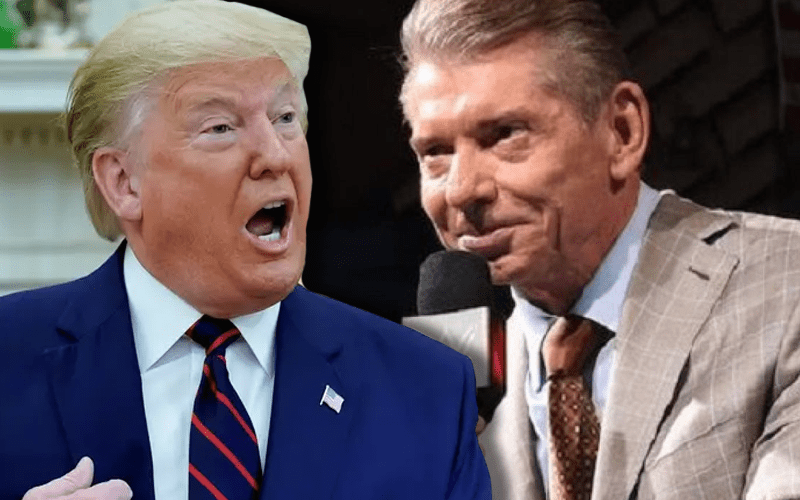 On the latest episode of Cornette’s Drive-Thru, Jim Cornette tells a story of Vince McMahon getting “hot” after Donald Trump made a joke about how his plane was bigger after being on a runway side by side. Cornette also talks about the similarities between both Donald Trump and Vince McMahon.

Jim Cornette on Vince McMahon getting ‘hot’ after Donald Trump jokes about having a bigger plane:

“So there’s a bunch of people standing around Vince’s big WWE plane and they’re waiting to get on and they’re fucking dicking around, and all of a sudden they look out the window, and guess who the plane on the other side of them is, Donald Trump, with a bigger fucking plane. This was before he was President obviously. Trump pulls up in a bigger fucking plane, and Vince looks over and sees him and they actually see Trump looking out the window waving, and I can’t remember the exact method of communication when I heard the story but it’s not like they could roll down the window and yell at each other like two teenage kids side by side in hot rods, but obviously they know each other so Trump either called Vince or sent a fucking pilot with a message, or whatever the fuck, but it was like, ‘Hey Vince, if you don’t have enough room for all those people on your plane, we got plenty of room over here.’ And he said fucking Vince got hot. His plane was bigger than Vince’s plane.”

Jim Cornette on how Donald Trump and Vince McMahon are so much alike:

“I’ve said this a million times, Vince and Trump are so much alike. If Donald Trump was articulate and could be charming in any situation and was halfway intelligent, he’d be Vince, because they think the same way, it’s just that Trump is a complete unsavory piece of pig shit in every way, whereas Vince you can like and have a good time with but still, secretly down deep, he’s a businessman and he’ll cut your fucking heart out, but at least Vince is smoother about it, but they both think the same way. Not putting illnesses over, not putting a pandemic over, because it would be bad for business, or in Trump’s case, it would be bad for my votes.”

Previous The Rock On The Possibility Of Having A Match With Roman Reigns
Next The Miz On Working in WWE Right Now Without a Crowd, Cinematic Matches At WrestleMania 36