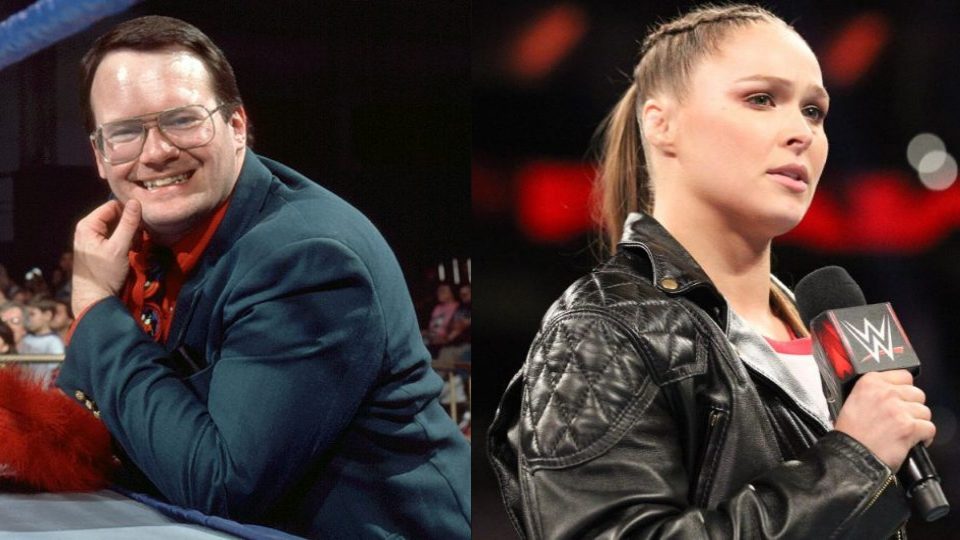 On the latest edition of Cornette’s Drive-Thru podcast, Jim Cornette gave his thoughts on the controversial comments Ronda Rousey made where she called wrestling “fake fighting” and said fans were “ungrateful.” Cornette called Rousey a “mental case,” “pampered,” and a “douchebag.”

Jim Cornette on Ronda Rousey having a mental breakdown in the UFC, now complaining about tough WWE schedule:

“You didn’t do it by yourself. Triple H laid that fucking match out, specifically because he wanted you to get over. Kurt Angle was her partner.”

“And Ronda Rousey performed her part admirably, and she did have a good persona and I loved the game face and did her deal and treated the business seriously when she was in the fucking ring, but apparently now, and I should have known something was wrong when she was the one who had the nervous breakdown twice when she lost two fucking MMA fights. Broke down crying and basically quit the business there because she lost twice, so she’s a mental case. But now, we found out, oh it was just so hard, it was just so hard, I was on the road 200 nights a year, making seven figures. I don’t know exactly what her contract was, what her pay was for the fucking year, it’s been reported at $1.5 million someplace, but I know the WWE, if anyone thinks Ronda Rousey didn’t make over a million dollars you’re fucking insane. And 200 days a year, my fucking asshole bleeds for you, darling.”

Jim Cornette on how Ronda Rousey insulted every person in the wrestling business:

“You’ve insulted every single person that ever got into the wrestling business that didn’t come in given a six figure contract by the WWF, and their fucking efforts and diminished that, you whine and you gripe and your pussy needs powdered because you were on the road 200 days a year. You have no more respect and you gained no more respect for the business. Then to come out and now that you’re done with it, obviously, calling fake fights and playing with your friends, you were just enjoying yourself for a couple of million bucks a year or whatever while Vince flew you around the fucking country and pampered you.”

“So anyway, fuck you and your fucking fake fights and your playing with your friends, you pampered, overpaid, fucking douchebag.”

Previous Stephanie McMahon, Sonya Deville & Becky Lynch On WWE’s New Series, ‘Fight Like A Girl’ on Quibi
Next Bret Hart On Vince McMahon Calling Him After His Stroke, Bitterness He Had Towards WWE