Jerry Lawler On His ‘Ramen Noodle Moonsault’ Line on Raw 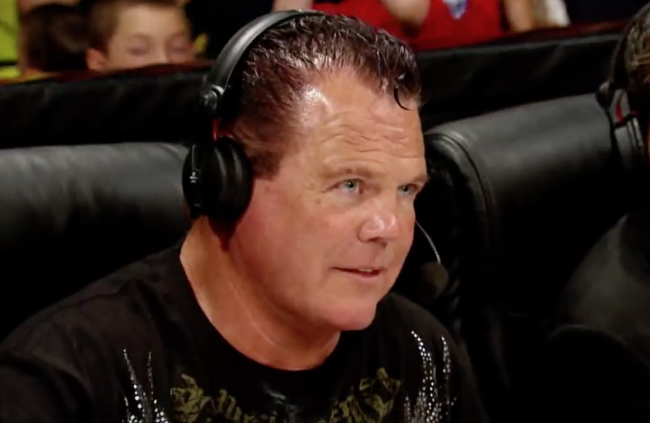 On the latest episode of  The Jerry Lawler Show, WWE Hall of Famer Jerry Lawler addressed a comment he made on an episode of RAW that brought some controversy. During a match, Akira Tozawa attempted a moonsault in which Lawler said that it looked like a “ramen noodle moonsault.” Twitter blew up with fans calling his statement racist.

Lawler tried to explain the comment by saying that he was trying to make himself look fooling, a strategy he used well when he worked with Mauro Ranallo. Unfortunately for him he was working with Tom Phillips and Byron Saxton and their chemistry together hasn’t developed as well so they didn’t know how to respond to his joke.

Jerry Lawler explaining why racism was the furthest thing from his mind:

“I said the words ramen noodles on Raw, and next thing you know, the internet blows up, and I’m a big racist. So let me go back and explain what I was doing and why being racist is the furthest thing from my mind. It all boils down to back in I think 2016, there was a time when I was doing commentary with Mauro, Mauro Ranallo, right? And that was new to me when they had put the two of us together. I had never worked with Mauro before, and he’s a ton of fun to work with. He’s got such energy and has done of all the boxing and all the Japan wrestling and stuff, and such a brain. This guy had such knowledge of all the wrestling moves that came out of Japan.

“Well see that’s what would happen to me in 2016. We’re sitting there, and I’m calling a match, and of course Mauro, all of the sudden, out of the blue, this guy does a move — I’m in the business 50 years, and I don’t know the names of these crazy moves, right? I’m seeing them for the first time. This guy does a crazy move, and Mauro goes, ‘There’s the orange crush tiger bomb dah dah dah! A senton!’ And I’m thinking in my mind, ‘Somebody’s just making these crazy names up, right?’ Because like I said, I’ve been around forever, and I’ve never heard them been called that. So, I sat down back in 2016, and I wrote down some — I just made up some names of what I thought would be funny names to go back at Mauro when he made a real name — when he called one of these things a real whatever it was supposed to be over in japan. Then I would say something like, ‘Oh! There’s the Ramen Noodle Moonsault!’”

Jerry Lawler on Tom Phillips or Byron Saxton not responding to the line:

“And of course, Mauro would just [say], ‘Oh, King! You know there’s no such thing,’ or ‘Blah blah blah blah blah.’ So, I was just doing it just to play devil’s advocate with Mauro. I said, ‘Oh my gosh! There’s a Ramen Noodle Moonsault!’ And of course, if I were still doing commentary with Michael Cole or JR, we had the chemistry to where each one of those guys would have known that I was just almost making a fool out of myself by claiming like I was acting like I knew what this unbelievable looking move was, right? And then, they would’ve just said — either Cole or JR would have said ‘Oh, King! You know better than that!,’ or ‘Don’t even start with something like that,’ you know. But we just — with Byron and with Tom, you know we don’t have that chemistry yet. We’ve only been working together for a short time. So when I said that, they didn’t even acknowledge it, so it kind of went out and they just kept talking and then I kept talking. I didn’t think anything about it either.”

Jerry Lawler explaining how the joke is supposed to be on him:

“The joke — like you said, that’s the part where me, Bobby Heenan, Jesse Ventura, all of the heel commentators, you do that sort of stuff, and the joke is on yourself. And that’s how you — so the people out there are going, ‘Look at that idiot. He doesn’t even know what he’s talking about, and he thinks he does.’ That’s where the joke was.”