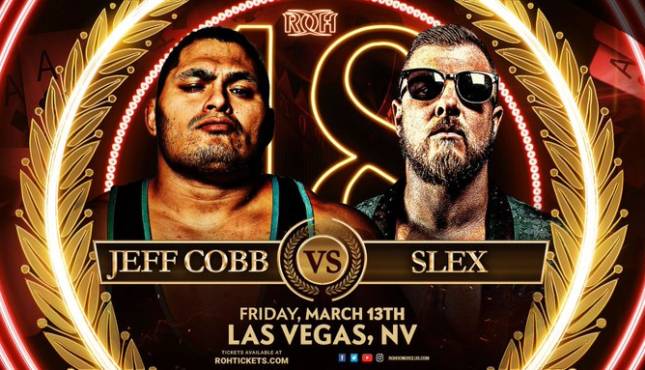 Due to travel issues Adam Brooks will not be able to appear at Ring of Honor’s 18th Anniversary PPV, but don’t worry ROH has found a more than worthy replacement. Jeff Cobb (who wrestled as Matanza in Lucha Underground) will be taking the place of Adam Brooks, and will be taking on Slex this Friday in Las Vegas. Here is the ROH press release:

With Brooks unavailable, ROH matchmakers have signed former ROH World Television Champion Jeff Cobb to take his place against Slex on the show.

Slex has faced nothing but top-level competition since arriving in ROH from Australia last month. In his three matches with the company, he’s been in the ring with the likes of Bandido, Marty Scurll, Flip Gordon and Brody King.

While Slex is still searching for his first victory in ROH, he more than held his own in every match and made a strong impression with Honor Nation. Slex also has caught the attention of Shane Taylor, who has attacked him on multiple occasions after his matches.

A win over a competitor with Cobb’s credentials would send Slex soaring up the rankings. You can count the number of times Cobb has been pinned in singles competition since his ROH debut a year and a half ago on one hand and still have fingers left over.

Cobb, who is willing to take on anyone in any promotion, wants to wear ROH gold around his waist again, and he knows a victory over Slex would strengthen his case for a title shot.

Will Slex be one of the rare few to defeat Cobb? Or will Cobb stand tall as Brooks’ stand-in? Join us live in Las Vegas or streaming for HonorClub to find out!