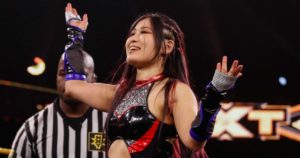 At a time when good news is especially welcome, Io Shirai delivered. The NXT superstar, out since January due to a knee injury, made her surprise return to the ring on tonight’s episode of WWE NXT.

A scheduled number one contender qualifiers match between Aliyah and Xia Li never took place, as Xia Li was found in the back holding her knee and writhing in pain. Xia Li was deemed medically unable to compete, but rather than award the match to Aliyah via forfeit, NXT Commissioner William Regal replaced Li with the returning Shirai. Shirai made short work of her opponent and joined Chelsea Green, Mia Yim, Tegan Nox, and Candice LeRae in the match to determine the NXT Women’s Championship number one contender.