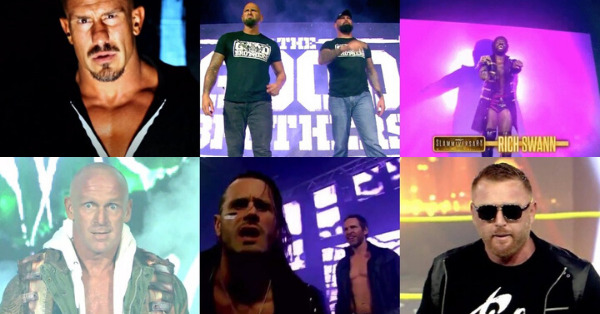 Check out the full press release below.

GALLOWS, ANDERSON, SABIN, SHELLEY, EC3, EY AND HEATH AMONG FREE AGENT ARRIVALS AT SLAMMIVERSARY 2020
The Good Brothers and Motor City Machine Guns Make Their Presence Known at Pay-Per-View; EC3 Appears, Bringing Mystery with Him
Eric Young is Back; Heath Boasts He is The Hottest Free Agent on the Market

The long-awaited mystery of which free agents will appear at Slammiversary 2020 was answered during the three-hour live pay-per-view event, as established stars crashed the party, causing chaos and bringing more questions to the IMPACT Wrestling roster.

The flurry of IMPACT newcomers started moments after midnight on July 18 when The Good Brothers, the team of Doc Gallows and Karl Anderson, confirmed they were bound for IMPACT Wrestling. A powerful pair that has been teaming together since 2013, Gallows and Anderson have worldwide history and fame, competing in New Japan Pro Wrestling and the U.S. with multiple championship reigns.

Slammiversary 2020 also featured the return of one of the most popular tag-teams in company history – Alex Shelley and Chris Sabin, a.k.a., the Motor City Machine Guns. The Guns accepted an open challenge from The Rascalz (Dez and Wentz) and immediately made their vision clear: the Guns want the gold!

The IMPACT singles division also was rocked at Slammiversary 2020, as the show ended with the returning EC3 on the screen.

EC3 is a two-time TNA World Heavyweight Champion and former IMPACT Grand Champion, among other accolades – and also will return to IMPACT! this Tuesday on AXS TV.

Another returning former World Champion was Eric Young (EY), the proud charismatic Canadian who made his TNA debut in early-2004 and has 12 years of history in the IMPACT Wrestling ring. EY is a former TNA World Heavyweight Champion, a former X-Division Champion and two-time former World Tag Team Champion. He also is a TNA Triple Crown Champion and TNA Grand Slam Champion.

Heath arrived and quickly proclaimed he is the hottest free agent on the market and ready to silence any skeptics. Competing since 2004, Heath has had considerable in-ring experience in tag team wrestling, with multiple tag championship runs, including a long history teaming with IMPACT star Rhino.

The event also featured the in-ring return of former X-Division Champion Rich Swann, who has been out of action since late last year due to injury. Swann was a late entrant into the main event to crown a new IMPACT World Champion.

Slammiversary 2020 was an action-packed extravaganza that featured multiple title changes, including Eddie Edwards reclaiming the IMPACT World Championship, defeating Ace Austin, Trey Miguel and the returning EY and Swann. Edwards’ main event victory further secured his legacy as one of the best-ever to compete in an IMPACT ring. He is now a two-time World Champion to go with his two X-Division and five World Tag Team Championship reigns.