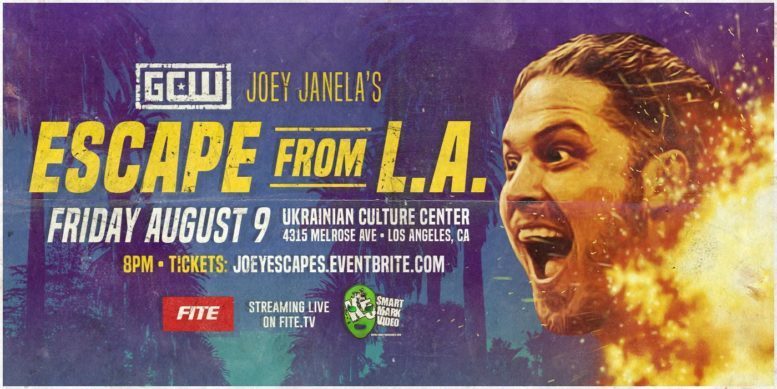 If you’ve been following All Elite Wrestling you’ve probably seen Joey Janela in a match or two over there. As AEW‘s TV deal gets closer some of their superstars are starting to say goodbye to the indie companies they’ve been working for, and tonight was Joey Janela‘s final show with GCW…that is, if he can ESCAPE FROM LA! Read on to see if he did and find out what other carnage ensued!
PRE-SHOW NOTES:
Match One: Jungle Boy Vs Jimmy Lloyd
WINNER: Jungle Boy won via Tilt-a-Whirl crucifix roll-up.

Know that you can do whatever you want as long as you work hard enough #livetoinspire pic.twitter.com/ACxs6g2txq

Match Eight: GCW Championship Match – Nick Gage (champion) Vs Jimmy Havoc
WINNER: Nick Gage retained the title with a piledriver on Havoc onto all of the chairs in the arena.
NOTES:
That wraps up this show! Were you there? What did you think? Let us know in the comments and we’ll catch you at the next one!