Flashback Wrestling Podcast is back with their 50th episode. In this episode Wesly Avendano takes a look back at one of the most controversial figures in professional wrestling history, Brian Pillman. But before getting into Brian Pillman‘s career Wesly dives into his “Let’s Get Social” segment where he talks about all the social media engagement he had this passed week on Twitter and Instagram.

This week Flashback Wrestling had a special guest as Wesley was joined by joined by Ryan from Pro Wrestling Mags N Pics to discuss the career of Brian Pillman. The guys talk about Pillman’s football career, his rise to stardom as “Flyin Brian” in WCW, his revolutionary “Loose Cannon” persona, his time in The Hart Foundation and much, much more.

Flashback Wrestling Podcast is back with a special bonus episode this week. In this episode … 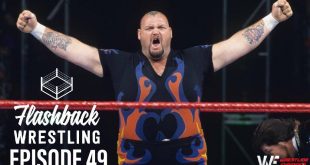 Flashback Wrestling Podcast is back with their 49th episode. In this episode Wesly Avendano takes a …