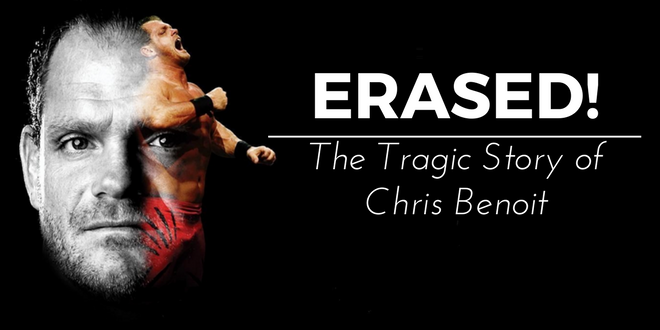 In the world of sports and sports entertainment, the word “Legacy” takes on a different meaning. An athlete’s legacy is what they leave behind or what people remember for years after they’ve passed away. In pro wrestling, some athletes have long fruitful careers, some have shorter yet more memorable runs, and the truly great have a combination of both. That was the case with Chris Benoit. Benoit was one of the greatest talents the wrestling business ever saw. He was already a world class performer, having captured championship gold in WCW, ECW, and NJPW, before arriving in WWE and solidifying his greatness. He’s a former WWE World Champion, Intercontinental Champion, Tag Team Champion, United States Champion, and the winner of the 2004 Royal Rumble. At first glance, Benoit seems like a hands down WWE Hall of Fame inductee, but unfortunately that’s not the case . Despite Benoit’s highly impressive resume, he’s been pretty much wiped out of wrestling history by WWE, and considering that WWE basically controls what mainstream wrestling fans see and remember, the odds of him ever being acknowledged and praised for his great accomplishments are slim at best. WWE cut ties with Benoit in June of 2007, immediately after the details surrounding the tragic death of him and his family were made public. Not only would the wrestling world have to mourn the passing of one of its most popular and talented performers, but they would also have to sit there and watch WWE pretend the man never existed. It was an unceremonious end to one of the greatest wrestling careers ever. Regardless of what WWE will or wont acknowledge though, a man named Chris Benoit did once upon a time work for them, and he wrestled some of the greatest matches in the company’s history. He deserves to take his place alongside the other legendary wrestlers of his era, instead of being ignored.