D-Von Dudley On Meeting The Undertaker, Reveals Funny Story Of Taker Dancing In A Restaurant 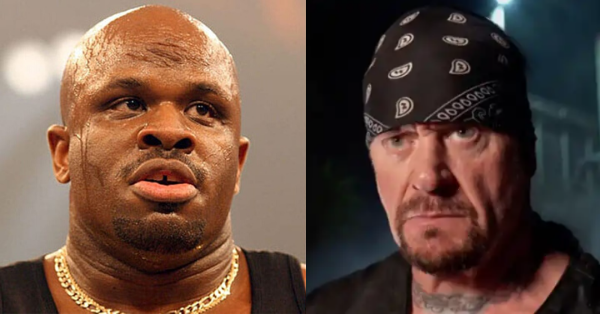 On the latest episode of the Table Talk Podcast, WWE Hall of Famer D-Von Dudley recently talked about meeting the Undertaker, how he treated the ECW guys, and a funny story about the Undertaker dancing to ‘Kung Fu Fighting.’

D-Von Dudley on meeting the Undertaker:

I met The Undertaker at the Manhattan Center. It was when ECW took on the WWE, when we invaded,” D-Von recalled. “I think that was in ’97 right before Barley Legal, the ECW PPV. When you watch Undertaker walk up to the ring, there’s an aura about him. That’s number one. Creepy as hell because he plays the part so well. There’s another aura about him where [you] don’t mess with him. Ask for permission if you want to joke with him because he can turn around and give you that Taker look, and you’re like oh God. Don’t say anything. He’s a great guy,” D-Von noted. “I remember we were done doing what we doing at the Manhattan Center. I wrestled Tommy Dreamer with Sandman coming in and interfering that night. I remember looking at him and going, ‘Oh my God. It’s The Undertaker.’ Just like everybody who has met Taker for the first time who’s watched him do his thing, it’s oh my God. You’re memorized, and you couldn’t believe it.

D-Von Dudley on Undertaker being nice to the ECW guys:

Taker is every bit of 6’10”. The nicest guy in the world. He came over to us when half of the guys back then didn’t think ECW shouldn’t have been anywhere near the Manhattan Center when WWE was there. Taker was welcoming us with open arms. He made us feel comfortable, and that’s the one thing about Taker. If you ever know anyone that knows Undertaker that have met him for the first time and has been in the locker room, he will make you feel at home. Just don’t disrespect the man and you’ll live to see another day.

It was WrestleMania in Toronto, and me and Taker, with my ex-wife at the time, we went out to eat with him. He was with his ex-wife at the time Sara,” D-Von said. “We were at Planet Hollywood in Toronto. I’ll never forget it. We’re at Planet Hollywood, and we’re all talking. We’re just shooting the stuff. The whole nine. All of a sudden, the song ‘Kung Fu Fighting’ came on, but the beginning of the song where it starts [D-Von sings the beginning of the song]. We’re talking, and he hears that. I was in the middle of saying something, and all of sudden he just stops. I look at my ex-wife like, ‘Did I say something wrong? What the hell?’ I looked at Sara and said, ‘I might have messed up.’ All of sudden, when that part came on, ‘Everybody was kung fu fighting,’ he just stood up in front of the whole restaurant [D-Von imitates Undertaker’s dancing]. We were just like, ‘What the hell?’ He goes, ‘Yeah, I love that song.