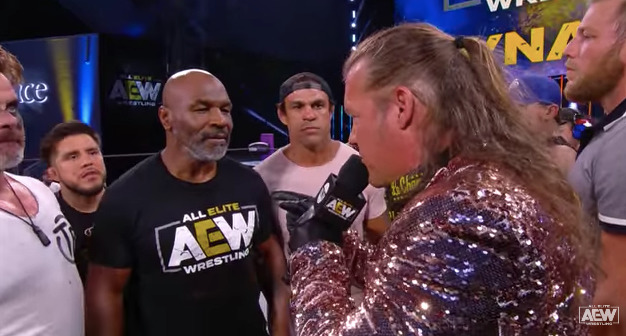 Chris Jericho recently had an interview with ESPN, where he discussed his angle with Mike Tyson that developed earlier this week on AEW Dynamite. Jericho mentioned how you don’t give someone like Tyson a script. He also said that he would be open to a boxing match with the former heavyweight champion.

Jericho also said that he was not concerned about bringing over a WWE angle to AEW, because according to him this was his angle not WWE’s angle. Jericho also talked about Henry Cejudo, and much more

Chris Jericho on how someone like Mike Tyson shouldn’t be given a script:

“I know what to expect. A guy like him, he’s a firecracker, man. He’s a loose cannon as an entertainer, as a performer. You don’t give Mike Tyson a script. You don’t rehearse something with Mike Tyson. You just go out there. He’s gonna do whatever the f— he wants to do no matter what. And that’s cool. I have 30 years of being in the ring and I can guide that.”

Chris Jericho on being open to a boxing match with Mike Tyson:

“Obviously, the idea is to do something more. That’s the thought process, I think between both parties. What that is at this moment, we’re thinking and discussing. Look, Chris Jericho versus Mike Tyson in a wrestling match, in a street fight, in a boxing match, would be big. I’m not Mike Tyson. I’m not 1/1,000th of Mike Tyson, but I’ve been boxing for six years. I know how to box. I could win fights on my own against people of my skill level. So if that’s what he wants to do, that works too. Whatever he feels comfortable with, I can make it good. That’s what I do for a living. That’s what I’ve been doing for 30 years.”

Chris Jericho on if he has concerns about bringing over a WWE angle to AEW:

“It’s a WWE angle? It’s a Chris Jericho angle. I was there. I don’t just wash away my entire 19-year history with the WWE. That’s ludicrous. Anybody criticizing that this was a WWE angle and we brought it over here — this is my life. It’s my story. Tyson knocked out Chris Jericho. He didn’t knock out Chris Jericho and The Rock and Hulk Hogan and Triple H and Kurt Angle. He knocked me out. That’s my story. It’s like if I write a song and it’s a huge hit and I released it on Sony records and then I signed with Warner Bros. and rerecorded the song. It’s my song.”

Chris Jericho on if he can make a wrestling match work with a 53 year old Mike Tyson:

“That’s what we do. There’s always a way to make it good. There’s bells and whistles. You just exemplify the strengths and eliminate the weaknesses. That’s the easy part. It’s just coming to some sort of a deal, or some sort of acceptance, of what we want to do if we’re going to move forward with this. The rest is easy. That’s my job. Once the deal is done or whatever we decide to do — if we decide to do more — that’s the easy part.”

Chris Jericho on if Henry Cejudo may possibly be used more in AEW:

“Absolutely. There was so much star power in that ring Wednesday night. We kind of didn’t focus on it as much as we should have. I had no idea these guys were even there. I think they just came to hang with their boy. You bring your posse to the ring. Vitor Belfort is here and Henry and Rashad Evans. I’m like, “What?! What are you talking about?” It happened so quickly. I would have loved to have gotten enough camera time with all of them. It was very fast. I had to worry about Mike Tyson.”