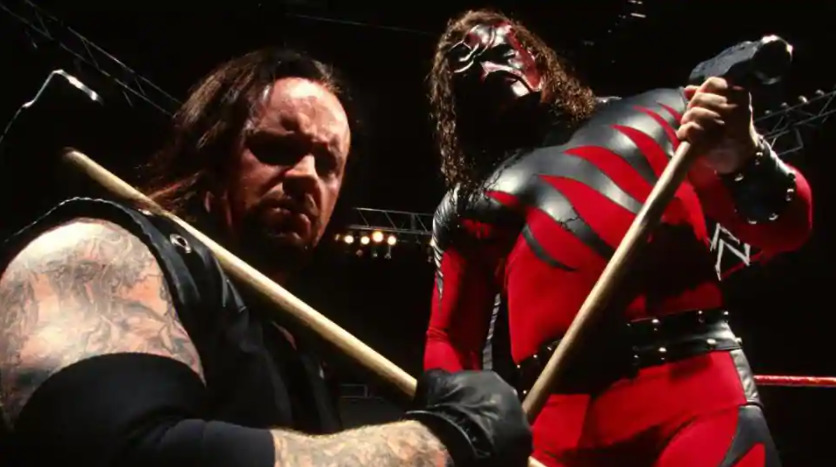 “Taker talks about this in the documentary, and it still sticks out to me, the way he would prepare for a meeting with Vince. Taker would often use me as a sounding board for whatever grievance or issue he may have had at the time, and he’d tell me he was going into Vince’s office and he was going to change this or that. He’d walk in all fired up, then walk out shaking his head. You could tell that, as soon as Vince started to speak, he’d cast a spell over Taker. Mark would end up walking out of the meeting with Vince, loving whatever idea he hated walking in.”

“Without a doubt, he’s the greatest creation ever in WWE. Second is Kane. They had a deep, good story behind them, and both of the men that portray those characters are those characters. Mark Calaway became The Undertaker, and Glenn Jacobs became Kane. That’s how seriously they took their craft. You’d watch them and believe them. The Undertaker and Kane, both of those were beautiful matches.”

“By far, the revelation that The Undertaker had a brother named Kane. Revealing that family’s background with the fire, thinking his brother was dead, realizing he was alive, that story ended up lasting all these years. It was initially only meant to be a storyline because we needed an opponent for The Undertaker. That’s why we created Kane. But the story had so many layers that we were able to create a brand-new character that could go off and succeed on his own, yet still come back to the family story. They were great adversaries and they were great partners, and that story has lasted and endured this entire time. For me, hands down, that’s my favorite Undertaker story.”

Bruce Prichard on the evolution of the storyline as showcased in The Last Ride:

“That’s the magic of The Undertaker. When you watch this documentary, you get to see the man behind the character in Mark Calaway. He was able to tell this story and be this character for all these years. That’s the true success. The beauty of this documentary is learning the story behind the character, hearing about that relationship with Vince and how all of this evolved. He wasn’t just the old-school Undertaker in the long trench coat. He went to the leather, went to the tear-drop, which I called his pirate stage. Then he became the ‘American Badass,’ then back to the Dead Man. The way this character has evolved is magical, and that’s why it has endured.”

“The presentation and the entire story, everything about it, I absolutely loved. It was a way to highlight the character of The Undertaker and AJ Styles, and put them in the very best light possible. Unfortunately, we didn’t have a stadium to play into it, but they made this high-profile match unique unto itself. To me, that was a success. The Undertaker had the opportunity to showcase his talent in a completely different way. It couldn’t have been better in my eyes.”