Britt Baker on Her Promos Being Based Off Bullet Points, AEW Allowing Creative Input 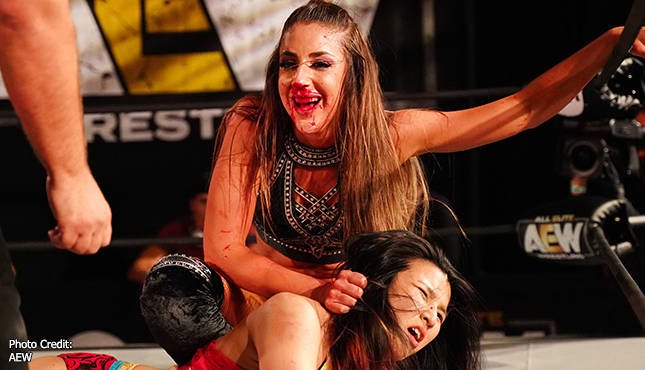 AEW star Dr. Britt Baker recently sat down with Jonathan Snowden from Bleacher Report to discuss several things including the evolution of her character, her promos being based on bullet points, having creative input in AEW, and much more. Check out the highlights below.

Britt Baker on the evolution of her heel character:

“It’s really totally not where I expected I would be right now, as far as character-wise. I love it. Every second of it, I’m enjoying it. It’s so much fun, because the crowd interactions, especially the live crowd interactions, it’s just so vocal and so energetic. Granted, they’re booing me, but still, just to have that reaction, it’s so much fun. It’s something that you just want more and more of.”

Britt Baker on her promos going off of bullet points:

“You can’t memorize what you want to say word for word, because you can’t. You won’t. It’s not going to happen. I just try to remember, basically, bullet points of what I want to say. Then, really, you have to feed off the crowd of when you want to say something, when you want to pause, when you want to acknowledge them. It really changes week to week to week, with the content, with the city, the crowd. There’s always a sense of comfort knowing I have Tony Schiavone standing there with you, because if anything really goes off the rails he can save it. It’s comforting, because I know he’s right there with me. Tony Schiavone is such a pro and he’s so amazing, his reaction, his body language, and his gestures truly make the promos, because he’s so, so good. It’s these little organic things, and these gestures. I nudged him one week and said, ‘Stand up straight,’ and he does it. He just acted on command, and it’s so funny because he’s such a professional. You learn really quickly what works and what doesn’t. There’s a lot of moving parts to making something successful. I think I’m a prime example of people just improving over time with more TV exposure and getting more comfortable, but that comfort also comes with help from the back.”

Britt Baker on how AEW allows creative input from their wrestlers:

“They really let us have our own creative input. This is my character. The help that I’m asking for isn’t given to me as a command. I’m asking for help because I want to be the best version of heel Britt that I possibly can be. Me texting Cody Rhodes late at night saying, ‘I was thinking about this. Do you think this is good?’ That’s just because I want to, not because he’s on top of me saying, ‘You need to do this character this way,’ and, ‘You have to say this.’ There’s so much creative freedom. I think that’s why it’s so successful, because it’s not somebody telling me what to do or how to do it.”

Britt Baker on her system for promos:

“Cody and Tony [Khan] and myself have a really good system with putting together these promos. I’ve never prided myself as a skilled promo person, so for these to have such good success, it’s really cool and it’s really rewarding because it’s scary when you’re not used to going out there and having a mic and it’s a major segment on Dynamite TV. Cody is really good at also reminding me, ‘Remember. You’re a role model.’ It’s really, really easy to fall into that heel trap of, ‘You’re the bad guy. You’re evil. You’re mean. You’re just yelling at everybody,’ but this character is not that. There’s a totally different flavor to being a self-proclaimed role model, where, in your mind, you really think you’re a babyface. He’s really good at figuring out the camera angles and posture, and just everything that you don’t even think of goes into a good promo or a good match.”