Britt Baker On Her Busted Up Nose During Match On Dynamite 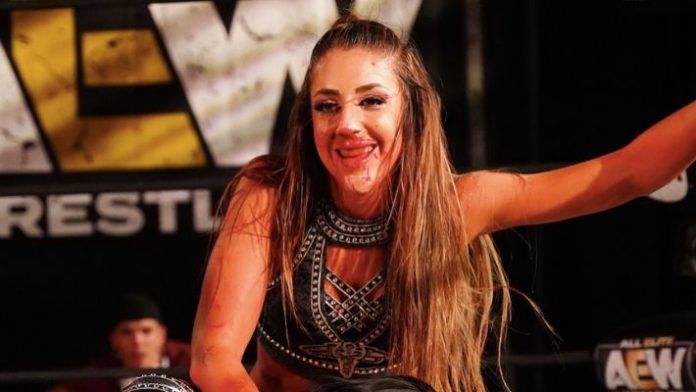 Dr. Britt Baker DMD recently had an interview with the Asbury Park Press where she discussed a match (watch below) that she had against Hikaru Shida on the April 8th 2020 episode of AEW Dynamite. During the match Baker busted open her nose, and blood poured out for the rest of the match. Baker would lose the match to Shida, but the image of Baker smiling with a busted nose was turned int a top selling t-shirt.

Britt Baker on the iconic imagery now associated with her blood-covered face:

“I didn’t know it (was iconic) at the time because my nose was just pouring blood,” Baker said. “I mean, my nose did not stop bleeding for hours. It was an all-day affair with me and Doc (Michael) Sampson (AEW physician) sticking cotton rolls up my nose because it literally would not stop bleeding.”

Britt Baker on the reaction backstage:

“(They) came by like, ‘Britt, oh my God. Wait until you see this, this is career-making for you,’ It’s hard to envision that until you actually see it because you want to get excited but you’re also like, ‘Oh, I don’t want to get my hopes up.’”

“When I actually got to watch the show back and hear Chris Jericho doing commentary along with my good friend Tony Schiavone, it kind of gave me goosebumps. I was like, ‘This is cool. This is one of my favorite wrestlers talking about me.’ “

Previous The Revolt On Their Time In WWE, Asking For Their Release, Tag Team Wrestling & Much More
Next PCO Reflects On His Journey To Becoming World Champion In ROH Spotlight Video