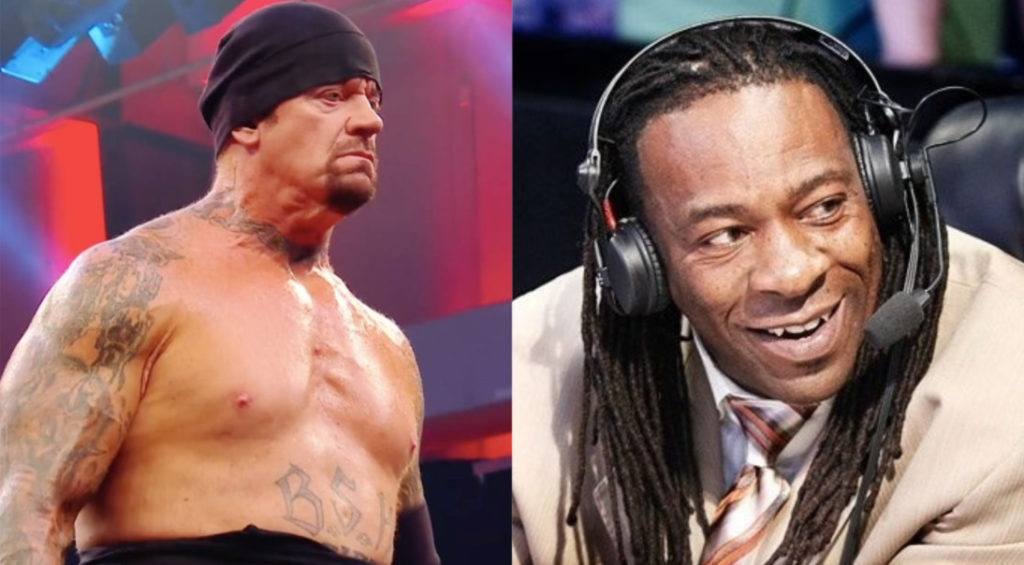 On his Hall of Fame Podcast, Booker T shared his thoughts on The Undertaker possibly retiring after he said that he had “no desire” to get back in the ring. Booker also talks about how much respect he has for the Dead Man, being welcomed by Taker when he first arrived to WWE, and much more.

Check out the highlights or listen to the full clip below.

Booker T on The Undertaker saying he has no desire to return to the ring:

“As far as The Undertaker calling it quits, he’s retiring from the ring. He said that he has no desire to get back into the ring and wrestle. And that right there, man, is a shocking statement. It really is. It’s shocking, but every man has — like Clint Eastwood said in a movie, ‘Every man’s got his limitations.’ You know what I’m saying? And I think that’s where we are right now with The Undertaker. Having that little girl, having his wife, I think that right there — and then also, being in this pandemic era, having a chance to sit back for a minute and open your eyes and see, ‘Wow, man. I think my priorities might need to re-shift, for a second.’ You know, because getting — god forbid, just getting the coronavirus for everybody, it’s not the same. For a lot of people, it’s like a death sentence. It makes you think. Like I said, over the last few days since I felt like I got this thing, I swear man. I feel a totally different way about my thought process man. I was watching the ESPYs last night, and I was watching Stuart Scott. And literally, I broke down and started crying like a baby, literally, and I just couldn’t stop. I was like, ‘Oh man,’ because he was talking about his little girl. Such a strong dude, man, in the face of the unknown. He’s such a strong dude. Like, wow. My priorities [changed] — I understood, I understood.”

Booker T on the respect he has for The Undertaker:

“It wasn’t something that I wasn’t aware of, but it made feel a certain a way, and I’m sure Mark [Calaway], The Undertaker, has gotten to the point where he feels he’s done everything in wrestling. He’s seen it all. He’s done it all. He’s been all over the world many times over. But to watch that little girl grow up and maybe walk her down the aisle one day, that’s the ultimate championship for him. I know it is for me. But to see him walk away from the game man, I salute him. I definitely give him the salute and say, ‘Hey man, you did it. Nobody else did it better as far as going out there and weathering the storm.’ But more importantly, man, the guy was a leader, man . The guy was a soldier, a general. Not just a soldier, he was the head general, a guy that we all looked up to because worked harder than all of us, but he was the guy, always to be the first one to say, ‘Hey man. Let’s go out here and do this together.’ You know, that’s what I appreciate about that dude, man.”

Booker T on how Undertaker thanked him when he arrived to WWE:

Since Day 1 when I came into that company, he took me [aside] and said, ‘Hey man, thanks for being a part of this team.’ You know what I mean? And you are part of the team. And him and I, even right now, like I say, a couple weeks ago, just playing golf. I beat that boy down like he stole something, but that’s another story.”