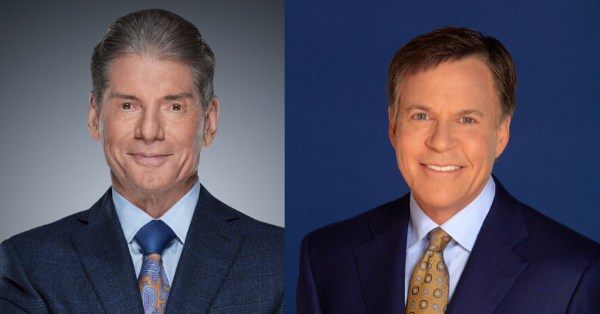 Recently Bob Costas was a special guest on the Alex Feuz Show and was asked about his interview with Vince McMahon back in 2001. During the interview McMahon became frustrated and aggressive toward Costas after a line of questions about the early problems with the XFL, and then the risque content that WWE had during that time. McMahon definitely let his emotions get the best of him as he was visibly angry and got in Costas’ face several times, and jabbed his finger at Costas’ chest.

Costas talked about his reaction, and how he wanted to remain calm and professional during that time, because he knew it was good TV. He talks about the lack of experience McMahon had with serious interviews. He also gives his thoughts on those who believe McMahon “won” that exchange. We have included the highlights and the full Alex Feuz Show episode below.

Bob Costas on his reaction when Vince McMahon got aggressive with him:

“Well, I knew it was good television. It was live. It’s HBO, so there are no commercials. It went on for nearly a half an hour, and much of that was unremitting tension. So I know it’s good TV, but I’m trying to stay with a line of questioning that has journalistic merit. I wasn’t trying to stir it up beyond what it already was. I didn’t expect him to react that way. But when he did, the idea is to keep your composure, keep your wits about you. And I didn’t think, as some people did, that I was in any kind of real physical peril. But I knew he was trying to intimidate me, both with body language and with the words that were coming back at me. And then when he came forward in his seat and started jabbing a finger toward me, I actually came forward closer to him and smiled at him a little bit, and I think that at him off all the more.”

Bob Costas on Vince McMahon not having experience with serious interviews before that:

“You’re right though when you say that prior to that time — I don’t know if he’d never been interviewed in a serious way, he probably had. But 99% of the interviews he had done were staged in what was then the WWF, now the WWE.”

Bob Costas on Vince McMahon being aggressive in a previous interview:

“And I wasn’t the only one who received that treatment. Armen Keteyian, a very good reporter who has work as CBS and at HBO and does 60 Minutes-quality stuff, he was interviewing McMahon some years ago and asking him similarly challenging questions. And Vince got mad and slapped Arem’s notes out of his hand. So this is not unprecedented for Vince McMahon.”

“And I guess there are some people who are hardcore wrestling fans or whatever, who think that the winner of an exchange — if there has to be a winner, there doesn’t always have to be. But if it becomes confrontational like that, people are gonna see it in those terms. The winner is whoever yelled the loudest, or whoever seemed as if they could win a back alley fight. Oh sure, Vince McMahon could have crushed me like a grape if he wanted to. But by that line of reasoning, as he himself has said subsequently, ‘It would have been interesting if Bob was closer to my size.’ Well let’s take that logic or illogic and push it forward. I don’t know what Chuck Todd’s weight is, but let’s say Chuck Todd weighs 175 pounds as the host of Meet the Press. And some Senator from Illinois also weighs 175 pounds and he doesn’t like the line of questioning. As long as they’re in the same weight division, why don’t they just duke it out?

“Do you see how preposterous this position is? This is a conversation and if the merits of the questions and answers are to be determined by who can win an arm wrestling match or some sort of back alley fight, then eventually Vince McMahon or anybody else would run up to somebody bigger and stronger than they would. And would that decide the merits of the points they’re trying to make? I’m very content with what happened on that night in 2001. I hope, so he can sleep well, I hope that Vince is too.”

Bob Costas on being a fan of pro wrestling growing up:

“Yeah, I grew up as a wrestling fan. And that goes to the early 1960s, watching wrestling on black and white TV. And it was a broad farce, good-natured, cartoonish-type characters. And we know what it became. And the women became, not damsels in distress, but objectified in a way that only the most desensitized dope would find appealing. And then there were other aspects of it, and obviously it was saturated with steroids and least common denominator vulgarity. Look, let’s make this clear. I’m no prude about this stuff. I grew up with Saturday Night Live. I can give you every Richard Pryor-Chris Rock-George Carlin routine you can think of. But there’s a difference between pushing the boundaries with wit and intelligence and actually something to say, and just in effect banging two garbage cans together and calling it entertainment.”

Previous Triple H on Decision to Continue With WrestleMania, Competing Without A Crowd, Favorite WrestleMania Moments
Next Edge On Making His Return, Royal Rumble, WrestleMania, And More