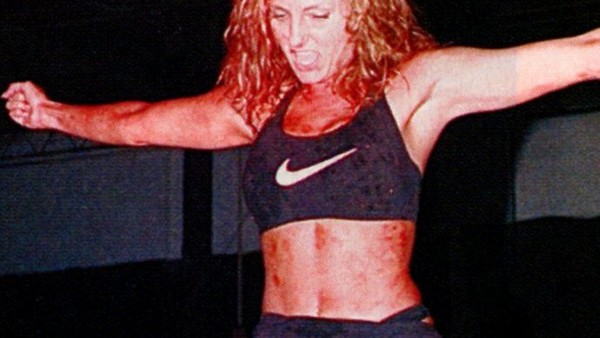 ‘The Innovator of Violence’ Tommy Dreamer along with his wife Beulah McGillicutty were special guests on the latest episode of Busted Open Radio. McGillicutty had not appeared on a live radio interview since 1998 when she left ECW.

The conversation eventually centered around Beulah’s violent ECW match against on screen manager Bill Alfonso which took place in 1997 at ECW’s ‘As Good As it Gets’ show. ECW owner Paul Heyman once described this match as one of his favorite matches in the history of ECW. The match lasted about 5 minutes, but they were a bloody 5 minutes.

Allegedly Bill Alfonso had been giving information to rival WCW while still working for ECW. This was at a time when WCW was looking into adding talent. In ‘The Rise and Fall of ECW’ documentary, Paul Heyman said that Alfonso’s performance in this match saved his career in ECW, as even though Alfonso and McGillicutty were not trained wrestlers they gave it their all and it showed.

While talking about how Alfonso almost bled to death after cutting an artery Beaulah McGillicutty said “Yeah, it really scared me. I thought he was gonna die.” Dreamer then asked McGillicutty about her ‘stench’ of blood after the match as she walked throught the curtain “it was worse when I stepped in the shower and the hot water hit my hair” Belulah continued. “Blood dried in. It was gross.”

The also discussed how Beulah broke her arm after hitting Alfonso, “I finished the match, though” Beulah confirmed. “I just want to say that I didn’t cry and leave the ring.” Dreamer goes on to say, “She had a cast from her wrist, all the way up to her shoulder and it looks like a sickle clothesline thing. She had to fly from Detroit to Japan, 13 hours sitting next to the Sandman.”

You can listen to to Busted Open Radio on Sirius XM or listen to the Podcast version here.