Batista: WWE World Champion To Guardian Of The Galaxy 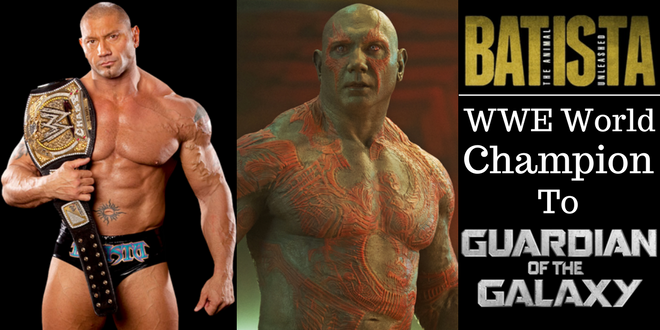 Hulk Hogan, Roddy Piper, Jesse “The Body” Ventura, and of course Dwayne “The Rock“ Johnson. That’s just a small list of professional wrestlers who went and tried their hand at becoming a Hollywood star. The first three are Hall of Fame legends, but were never able to truly break into the movie business. Obviously, things went a little better for The Rock. He’s arguably the biggest action star in all of Hollywood, and he’s provided a blueprint for transitioning from the squared circle to the big screen. Now a days we see Randy Orton, The Miz, Dean Ambrose, and of course John Cena trying to cross over, but there was one guy who bet on himself and took a stab at being an actor before they did, “The Animal,” Dave Batista. Long before he was guarding the galaxy or beating up James Bond, Batista was one of the biggest stars in Vince McMahon‘s company. He’s a former WWE Champion, World Champion, Tag Team Champion, and a two time winner of the Royal Rumble match. At his peak, he was everything WWE hopes Roman Reigns can become. He had graduated from being the “muscle” of his particular stable (Evolution), just like Roman did. He got a big singles push, just like Roman did. He won the Royal Rumble and main-evented WrestleMania, just like Roman did. The only difference is, when Batista did it, the fans didn’t reject him. Unfortunately, his relationship with the fans, and WWE for that matter, deteriorated over the years. His latest return to the company was badly mishandled by the creative team, and it lead to him leaving on less than desirable terms. It’s a shame considering how big of a presence Batista was during his era.