Breaking News
Home / WWE / Barry Darsow On Why Demolition Is Not In The WWE Hall of Fame, The Road Warriors, & Much More

Barry Darsow On Why Demolition Is Not In The WWE Hall of Fame, The Road Warriors, & Much More 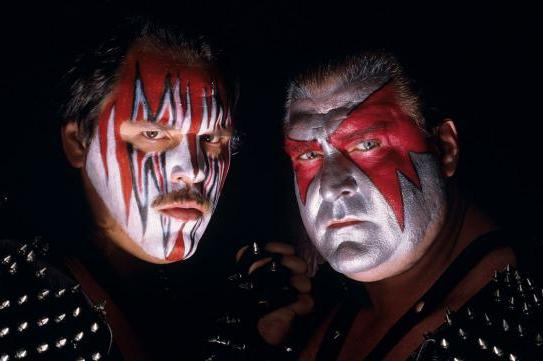 Barry Darsow recently had an interview with VOC Nation’s Wrestling with History, where he discussed several topics from his career.

Barry Darsow on working with his friends:

“Every wrestler’s dream is to be in the locker room and wrestle with your best friends and I was lucky enough to do that with Rick Rude, Curt Henning, the Road Warriors, Brady Boone…there are so many of my friends I grew up with; here I’m wrestling these guys.”

Barry Darsow on the Road Warriors coming into WWF/WWE:

“It was really a different situation going against the Road Warriors because we were two similar teams and the way Vince McMahon put the whole thing together, it didn’t really work that well. I thought that they were going to keep us apart for a while and really make it something special, but it wasn’t. It was almost like Vince was trying to get rid of Demolition and bring the Road Warriors in, and it was hard to get the Road Warriors over because at that time we were over…but we had really good matches and everything went really well, but it could have been so much better.”

Barry Darsow on talent not being happy about working with the Road Warriors:

“There’d be a chalkboard before the TV (tapings) and it would have whoever everybody wrestled (that night). Whoever the Road Warriors name was next to you could just see their heads hanging down like ‘oh my God, here we go.’ But, (they are) great guys.”

“Paul (Ellering) was so smart. He’s been in the business for so much longer than we were when we got started, and he knew that he had a tag team that was different than everybody and was the top tag team anywhere. He was smart enough to tell these guys, ‘we’re not just going to sign a contract for just this one company; we are going to go around’ and what ended up happening is they were the top guys in every territory that way. They never wore them out. The promoters never beat them to get other people over, so they just kept winning in every territory they were at. You always wanted to work with those guys because then you’re in main event matches all over.”

Barry Darsow on getting the Road Warriors over in the WWF/WWE:

“When the Road Warriors were coming in, it was tough for them to come in when we were already the baby faces. They were like heels (to WWE fans) coming in because they were from the southern organization and we were from the WWF at the time. That’s where the matches were a little difficult…we were a little bit more over as baby faces than they were, and then Vince tried to put masks on us and we ended up with Brian Adams as a third partner; we had all these different scenarios to try and turn us heel, and still the people didn’t really want to root for the Road Warriors yet. It took quite a while to get them over as baby faces and that was around the time that we left.”

Barry Darsow on if Demolition was a copy of the Road Warriors:

“When I first went up there…they had pictures of the Demolition with the spikes and the masks and stuff… The Road Warriors were down (in the NWA) from the movie Road Warrior, so (the WWF) had to have their guys that were kind of like that…I don’t know that for sure. I know we worked completely different than they did, we did have a different look, our interviews were different, so we were different from them.”

“If Bill wouldn’t have gotten sick it would have changed a lot of things. It was terrible; he had an allergic reaction to shrimp. He pretty much died, and then they brought him back (to life). It was a terrible thing. The Demolition was Ax and Smash, it wasn’t (Smash and) Crush, so whenever you bring in someone to replace the main people it just doesn’t work. And it didn’t work…you’re not special anymore, and the fans know that…that was the writing on the wall.”

Barry Darsow on Demolition not being in the WWE Hall of Fame:

“I honestly don’t know why we have heat. I’ve never spoken bad about anybody, I’ve always went by the rules and everything. Bill has kind of ruffled feathers a bit but still I don’t know if we’ll ever get into the hall of fame or not. I don’t know what we’ve done. It’s actually really hard when wrestling was my whole life, and I don’t even talk to anybody anymore up in the WWE. It’s just really strange.”